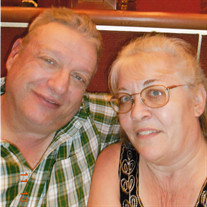 Goodbyes are not forever. Goodbyes are not the end. They simply mean we’ll miss you, until we meet again….. Arthur John Herbert, 59, of Barton, NY passed away on September 30, 2019 with his loving wife by his side. Art was born April 25, 1960 in Hancock, NY to the late Pastor William Kilmer and Evelyn Gertrude (Martinet) Herbert. He graduated from Susquehanna Community High School and on April 2, 1983 married the love of his life, Jean Marie Braman. Art was a longtime employee of the Serento Cheese Company and retired as a Corrections Officer with NYS Dept of Corrections from Southport Prison. Art enjoyed long country rides on his motorcycles, sharing stories with his friends on the ham radio, hunting and gardening. He was especially proud of making his own pickles from his harvest this year. Art treasured spending time with his family and was known for “making messes”. Art will be greatly missed by his loving wife, Jean; his sons: John (Tammi) Herbert and Patrick (Amanda) Delaney; his grandchildren: Alana, Mikala, Zaine, William and Jaxen; his siblings: Evelyn Lewis, Carl Herbert, Larry (Ada) Herbert, and Jeff (Joan) Herbert; his mother-in-law: May Braman; his brothers-in-law and sisters-in-law: Lorraine (Randy) Barbarash, Peggy (Steve) Bruzee, Mike (Joanne) Braman, Daniel (Amy) Braman and Tom (Tammy) Braman. Several nieces, nephews and their families also survive. Art was predeceased by his parents William and Evelyn Herbert. Family and friends are invited to attend a period of visitation on Saturday, October 12th from 10 to 11 am at the Sutfin Funeral Chapel, 273 S. Main St., Nichols. A funeral service and celebration of his life will follow at 11 am with Pastor Larry Jennings officiating. Interment and prayers of committal will follow in the Smithboro Cemetery. Memories and condolences may be shared by visiting his guestbook at www.sutfinfuneralchapel.com

Goodbyes are not forever. Goodbyes are not the end. They simply mean we&#8217;ll miss you, until we meet again&#8230;.. Arthur John Herbert, 59, of Barton, NY passed away on September 30, 2019 with his loving wife by his side. Art was born... View Obituary & Service Information

The family of Arthur J Herbert created this Life Tributes page to make it easy to share your memories.

Send flowers to the Herbert family.