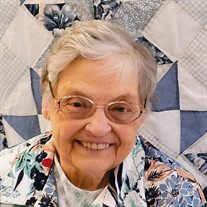 A life well lived is a precious gift, of hope and strength and grace, from someone who has made our world a brighter, better place. Barbara Jean Rogers, age 82, a lifelong resident of Litchfield Pennsylvania passed away on June 9th 2019 after a brief battle with Leukemia. Barbara was born on September 29th 1936 in Sayre Pennsylvania, the daughter of the late Millard and Bernice (Nichols) Goble. Barbara was a graduate of Sayre High School in 1954. On June 9, 1955 at the Litchfield United Methodist Church she married Jack Laverne Rogers of Athens Pennsylvania. Barbara often made mention of the fact that she became a member of this church when she was only 12 years old. Barbara’s roots with the church go even deeper however, as her parents were living in the church parsonage at the time of her birth. Barbara loved to cook and she adored children. She managed to incorporate those two loves into a career as a cook in the cafeteria with the Sayre Area School District. Barbara especially looked forward to cooking for the 6th grade class when they went on an overnight field trip to Camp Brule at the end of each school year. Barbara is survived by her loving husband of 64 years, Jack L. Rogers, her 2 sons and daughter-in-law’s, John Wesley and Ruth Ann (Hubbard/McDonald) Rogers of Naples Florida and Shawn Laverne and Kimberly Ann (Merrill) Rogers of Chazy, New York. Barbara is also survived by 2 sisters, Janice Jones of Waverly, New York and Nancy Depue of Gainesville, Florida. Surviving brother-in-law and sister-in-laws are Ed and Jean Rogers of Merritt Island, Florida, Marjorie (Schill) Rogers of Columbia Crossroads, Pennsylvania, and Rosie Ackley of Sayre, Pennsylvania. Barbara has 4 Grandchildren, Jennifer (Rogers) Rad and her Husband Michael of King of Prussia Pennsylvania, Steven Rogers of Naples Florida, Nolan Rogers of Santa Cruz, California and Spencer Rogers of Burlington, Vermont. She has two Great Grandchildren Sean and Aralyn Rad of King of Prussia, Pennsylvania. Additionally, Barbara is survived by 21 nieces and nephews along with their spouses and children. She is survived by neighbor Jack Pond of Litchfield Pennsylvania who Barb often referred to as “my third son”. Last but not least, Barbara is survived by her beloved, black cat, Sammy. Barbara was preceded in death by her sister Audrey Warner and Brother-in-laws Ray Raupers, Sam Northrup, Walter Ackley, Robert Warner, Harry Jones, Gerald Depue and Wayne Rogers. Family and friends are invited to attend a period of visitation on Thursday, June 13th from 10 to 11 am at the Litchfield United Methodist Church, 2759 Litchfield Rd., Sayre, PA. A memorial service and celebration of Barbara’s life will follow at 11 am with Pastor Jon Austin, officiating. Interment and prayers of committal will follow in the Nichols Cemetery. Following the services a luncheon and time of sharing will be held at the Litchfield Fire Station, 1773 Lee Road, Sayre, PA 18840. In lieu of flowers, the family asks that donations may be made to the Litchfield United Methodist Church c/o Brett Rogers, 2759 Litchfield Rd., Sayre, PA 18840 in loving memory of Barbara Jean Rogers. Memories and condolences may be shared by visiting her guest book at www.sutfinfuneralchapel.com Caring assistance is being provided by the Cooley Family of the Sutfin Funeral Chapel, 273 S. Main St., Nichols.

A life well lived is a precious gift, of hope and strength and grace, from someone who has made our world a brighter, better place. Barbara Jean Rogers, age 82, a lifelong resident of Litchfield Pennsylvania passed away on June 9th 2019... View Obituary & Service Information

The family of Barbara Jean Rogers created this Life Tributes page to make it easy to share your memories.