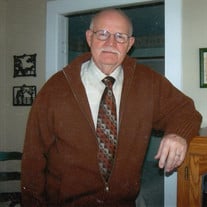 God looked around the garden and found an empty space. He looked down upon the earth and saw your tired face.......Barry R. Davis, 85, of Barton, NY passed away peacefully in his sleep Wednesday evening, May 23, 2018 at the home of his daughter and son-in-law, MaryEllen and Bill Middleton. Barry was born on August 8, 1932 in Scranton, Pa a son of the late Russell and Alverna (Savage) Davis. He was a graduate of Scranton Central High School class of 1950. Following graduation Barry completed basic training with the US Army in 1952. On August 30, 1952 he married Rosann L. Cartusciello and together they shared sixty-one years of marriage until her passing on February 15, 2013. Barry retired following thirty-three years of service to IBM. Devoted to his community, Barry spent twenty-six years as a coach and director for the Tioga Youth Organization. Many area neighborhood children will remember gathering at Barry and Rosann’s house for Easter egg hunts and he also played Santa Claus for various organizations. His greatest pleasure was being outdoors and spending time in his garden. Barry was a Master Gardner and shared his knowledge with many throughout Tioga County offering talks to garden clubs, at public classes, Master Gardener volunteers and school students. In 2016, he was recognized by the Tioga County Cooperative Extension for his years of contributions to the Master Gardener program. His vegetable garden served as a research station/lab for tomato pruning methods, variety trials, fertilizer regiments and more. His life’s mission was to have the earliest tomato as possible and 4th of July was his goal. Barry will be greatly missed by his daughter and son-in-law: MaryEllen and Bill Middleton; his son and daughter-in-law: Mark and Gwen Davis; his grandchildren: Ryan Middleton, Ashley Middleton, Emily Davis, Amy Davis and Mitchell Davis. He was predeceased by his wife Rosann; brother Stewart Davis; and twin sister Barbara Foster. Family and friends are invited to attend a period of visitation on Tuesday, May 29th from 4 to 6 pm at the Sutfin Funeral Chapel, 273 S. Main St., Nichols. A memorial service and celebration of his life will follow at 6 pm with Pastor Mary Jean Simonin, of the Nichols United Methodist Church officiating. Interment will be held at the convenience of the family in the Barton Cemetery. Memories and condolences may be shared by visiting his guest book at www.sutfinfuneralchapel.com Those who wish may kindly consider a memorial contribution to the Collen Chamberlain/Joelle Robinson Scholarship Fund; c/o Renee Wainwright, Business Office at Tioga Central School, PO Box 241, Tioga Center, NY 13845 in loving memory of Barry R. Davis.

God looked around the garden and found an empty space. He looked down upon the earth and saw your tired face.......Barry R. Davis, 85, of Barton, NY passed away peacefully in his sleep Wednesday evening, May 23, 2018 at the home of his... View Obituary & Service Information

The family of Barry R. Davis created this Life Tributes page to make it easy to share your memories.

God looked around the garden and found an empty space. He looked...