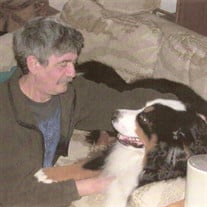 Brian "Jack" Wiles, of Little Meadows, passed away on June 18, 2015, at home, as he wished. He was almost 70 years old. Jack was dedicated to the Navy and country, especially fast-attack submarines. His 21 years in the Navy were during The Cold War. He spent so much time off the coast of Russia that he knew that area better than the US. His first deployment was aboard the USS Patrick Henry (SSBN599), a boomer, or a nuclear sub, in 1966. He never mentioned that to people who knew him. In 1968, he was aboard the USS Narwall (SSN671). He also did cruises on the USS Sturgeon (SSN637) and the USS William H Bates (SSN680). While working at Naval Electronics Systems Engineering Center (NESEC) on the Sea Nymph Operational Review Team (SNORT), he did highly classified operations on the USS Cavalla (SSN684) and the USS Bergall (SSN667). Prior to marrying Donna, twice in San Diego (once for the Navy), the only time he went on a vacation was to help sailors move. That was to change. Jack and Donna married in San Diego and moved to Hawaii the following day to begin Jack's "twilight tour," or last duty station. While on the Big Island watching TV, a conversation happened that would change the way the marriage would go. "Does that sound good." "Umm." "Do you think we should go?" "Umm." So, after they returned to Oahu, Donna called the travel agent and booked a trip to Tahiti. Then she called Jack and told him to pick up the tickets. "Tickets to where?" was the response. "To Tahiti. You said you wanted to go." "Say what? I am in the Navy and can't just go when I want." Praise God that the trip was very good. Jack sailed most weekends while in Hawaii and waterskied most weeks. He traveled all over the world with the Navy (earning miles). Jack and Donna went island-hopping and enjoyed visiting the other islands and learning about Hawaiian history, especially when friends came to visit. After Jack retired from the Navy, Donna got an idea about going on a cruise. Jack's response was, "I'm not going to pay money to go to sea." So Donna went with her friend, Maureen O'Connor, on a cruise. Jack later decided that maybe he should go on a cruise, and they went on a cruise to many small islands in the Caribbean. The third cruise that year involved Maureen, Jack and Donna, all going to Tahiti, again. Jack went on many cruises, the final one being to Costa Rica shortly after 9-11. Many trips were made to Mazatlan, Mexico, with Julie and Jeff Walker, friends in San Diego. Jack and Donna also went to Japan using the frequent-flier miles. They visited many historical castles in Japan with Dave and Liz Wisemiller leading the way. Jack was kind and caring. When our special "boys," Bear and Bo passed, he was never the same. He had a stroke shortly thereafter. He became home- and chair-bound. Thank you to the many, many angels who came to help us so many times. Cindy Fasulo was here at the end and helped in so many ways. Thank you, everyone. Dr. Cory made so many visits and was always caring and available. Thank you for all that you did for us. On June 16, 2015, with the help of many, many people praying, Jack accepted Christ as his Savior. The next day, one of the final things he did was squeeze Donna's hand when asked if he understood what that meant. God is good. There is always hope. Thank you, Pastor Dale and LuAnne and Mitch Ferrill. We donated Jack's body to science and his body went down the East Coast, finally ending up in Florida, where he was cremated. He arrived back to Little Meadows in time for Christmas. With the help of Brigid Johnson and Jacque Bell from Congressman Tom Marino's office, he will be laid to rest at Arlington National Cemetery with full military honors on April 6, 2016, at 10 a.m. His daughter, Traci (Jeff) Bakely (Audubon, NJ), grandson, Caleb, brother, Jeff Wiles, sister Barb (Ernie) Laffert, and wife Donna will attend. Pastor David Nelson will officiate. Maureen Darling, Mitch and LuAnne Ferrill and Jack McCreary will also be in attendance. College friends of Donna; Butch and Sandy Philliber will attend and stay in DC with her also. His son Michael Wiles is living in New Jersey and will not be able to attend. His sister-in-law, Susan (Rocky) Graziono, Carlsbad, CA, also will not be in attendance. Sue was the maid of honor at their wedding in 1981. Sister-in-law, Kath Wiles, Fresno, CA, is recovering from open heart surgery and will not be in attendance. Several nieces and nephews will not be in attendance. His parents, Robert E. and Yolanda Wiles predeceased him. Assistance, blessings and love provided by The Cooley Family of the Sutfin Funeral Chapel. You may leave notes of encouragement and condolences for the family at www.sutfinfuneralchapel.com.

Brian "Jack" Wiles, of Little Meadows, passed away on June 18, 2015, at home, as he wished. He was almost 70 years old. Jack was dedicated to the Navy and country, especially fast-attack submarines. His 21 years in the Navy were during The... View Obituary & Service Information

The family of Brian "Jack" Wiles created this Life Tributes page to make it easy to share your memories.

Brian &quot;Jack&quot; Wiles, of Little Meadows, passed away on June 18,...

Send flowers to the Wiles family.