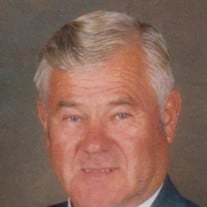 To watch Carl's Live Stream Service Clickhere When I come to the end of the road, and the sun has set for me, remember the love that we have shared and that will comfort thee... Carl F. Pendleton, 86, of Warren Center, Pa was reunited with his loving wife Lena “Toni” Pendleton on Wednesday morning, November 17, 2021 with his daughters by his side, at the Robert Packer Hospital, Sayre. Carl was born on August 5, 1935 in West Warren, Pa a son of the late Frank and Adela (Jones) Pendleton. On July 17, 1957 he married Lena Conklin and together they shared 59 years of marriage until her passing on January 25, 2017. Carl retired in 1998 following 47 years of delivering milk for Pendleton Dairy. He was a member of the First Congregational Church of West Warren, where he served as Moderator and Trustee. In addition, he also served as Fire Chief for the Warren Township Fire Company. Carl enjoyed seeing the country side on his many trips on his Harley-Davidson motorcycle, gardening, working in the woods getting firewood, bowling, camping and most of all the time spent with family. Carl will be greatly missed by his daughters and sons-in-laws Lynn and Scott Cook of Rome, Pa; Judy and Randy Davenport of North Rome, Pa; a loving Grampa to Amanda (Myron) Eastman of LeRaysville, Pa; Kaleena (Joe) Dughi of Rome, Pa; Tyler (Cathy) Cook of Rome, Pa; Kyle Davenport and Ashley Davenport of North Rome, Pa; five great grandchildren: Edwin, Charles and Gerald Eastman; Caleb and Kara Dughi. His sisters and brother-in-law: Margaret Densberger of Elmira, NY; Louise and Joe McTamney of Nichols, NY; his sister-in-law: Mercy Strope of Rome, Pa; Liz Conklin of Athens, PA. Brother-in-law: Don Jones of Helmet, California. Several nieces, nephews, cousins and their families also survive. Family and friends are invited to attend a period of visitation and time of sharing memories on Tuesday, November 23rd from 3 to 7 pm at the Sutfin Funeral Chapel, 273 S. Main St., Nichols. A celebration of Carl’s life will be held on Wednesday, November 24th at 11 am at the First Congregational Church of West Warren with Pastor David Pitcher, officiating. Memories and condolences may be shared by visiting his guestbook at www.sutfinfuneralchapel.com Those who wish may kindly consider a memorial contribution to the First Congregational Church of West Warren c/o Judy Davenport, 3645 N. Rome Rd., Ulster, PA 18850 or the Warren Twp., Vol. Fire Dept. PO Box 24, Rome, PA 18837 in loving memory of Carl F. Pendleton.

To watch Carl's Live Stream Service [Clickhere]https://my.gather.app/remember/carl-pendleton When I come to the end of the road, and the sun has set for me, remember the love that we have shared and that will comfort thee... Carl F. Pendleton,... View Obituary & Service Information

The family of Carl Pendleton created this Life Tributes page to make it easy to share your memories.

Send flowers to the Pendleton family.