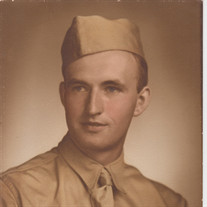 Carlton C. Jones, 92, of Potterville, Pa, passed away Monday, August 25, 2014 at the Golden Living Center, Tunkhannock, Pa following a period of declining health. Carlton was born on December 24, 1921 in Warren Center, Pa a son of the late Leo F. and Madeline (Nichols) Jones. He was a graduate of the Warren Township High School at Warren Centre class of 1939. The following year he entered the LeRaysville High school where he completed his high school education. Carlton was a remarkable fine baseball player and pitcher ~ he played with the Warren Centre team and was known throughout northern Pennsylvania and New York. On July 9, 1942, he was called to the colors and inducted into the armed services. He proudly served his country during WW11 as a radioman on a bomber and on July 30, 1943 his plane “Wing and a Prayer” was shot down and he was a prisoner of war for 18 months in Germany. On April 20, 1946 he married Maxine Corbin and together they raised three children. For many years, Carlton owned and operated Jones General Store in Warren Center. In addition, he also served as the Warren Center Post Master. Carlton was a devoted member of the Dille Parish United Church of Christ in Potterville; the VFW Post 6824 and a life member 388th Bomb Group Association. He enjoyed spending time in his vegetable garden, loved animals and was an avid Yankee’s fan. Carlton is survived by his wife of 68 years, Maxine Jones; his daughters and sons-in-law: Diane and Paul Milnes of Tunkhannock; Jacquelyn and Ronald Lawrence of Monroeton, Pa; a son and daughter-in-law: Leo and Susan Jones of Binghamton; a sister-in-law: Betty Sisto of Waverly; his grandchildren: Adam (Julie) Milnes; Carolyn Jones, and Trevor Jones; a great granddaughter Hazel Marie Milnes; nephews Angelo Sisto and Thomas VanZile. Carlton was predeceased by his sister Myrtle VanZile and a infant brother Leo Ernest Jones. Family and friends are invited to attend a period of visitation and time of sharing memories on Saturday, September 6th from 10 -11:30 am at the Dille Parish United Church of Christ Church in Potterville. A memorial service and celebration of his life will follow with Pastor Tom Burlington, officiating. Military honors will be accorded following the service. A luncheon and time of sharing will follow the service at the community hall. Interment will be held at the convenience of the family in the Darling Cemetery. Memories and condolences may be shared by visiting our website at www.sutfinfuneralchapel.com Flowers will be provided by the family and the family requests that memorial contributions be directed to the Dille Parish United Church of Christ, c/o Martha Young, 747 East Street, LeRaysville, PA 18829 in loving memory of Carlton C. Jones.

Carlton C. Jones, 92, of Potterville, Pa, passed away Monday, August 25, 2014 at the Golden Living Center, Tunkhannock, Pa following a period of declining health. Carlton was born on December 24, 1921 in Warren Center, Pa a son of the... View Obituary & Service Information

The family of Carlton C. Jones created this Life Tributes page to make it easy to share your memories.