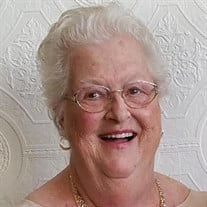 A heart of gold stopped beating, two willing hands at rest, God broke our hearts to prove to us, He only takes the best ~ Our hearts are filled with grief at the passing of our mother, Carol B. Clark, 80, of Windham, Pennsylvania on Thanksgiving morning, November 26, 2020. Carol was born on October 1, 1940 in Beacon, New York, a daughter of the late Joseph and Viola (Collyer) Andrus. At the age of 11, she moved with her family from Long Island, NY to Tioga Center where she graduated with the Tioga Central High School class of 1959. She never lost to ties to Long Island completely, throughout her childhood visiting Jones Beach. She loved the clarity of the ocean air and the hum of the ocean waves – a fondness she passed on to her children and grandchildren. Carol began her career with Western Electric, opportunely located in Manhattan, only a hop, skip, and a jump from Jones Beach. Her heart was always in Bradford County and she was glad to call it home. On January 25, 1964, in Apalachin, NY she married S. James Clark, together they shared 46 years of marriage, welcoming their first child in 1965. Carol stayed home to raise four children with love and devotion. Memories were shared and she treasured the time spent with her children. Her heart was broken on November 1, 2010 with the passing of Jim. Carol stepped into a new phase of her life that would last 23 years when she became an employee of Robert Packer Hospital in the Patient Business Service. Many friendships were made during her career there. In her free time, Carol enjoyed crafts of all kinds. Many hours were passed conversing with her sisters as they fashioned hand-made angel ornaments to pass around at Christmas time. Carol also liked to bake – another hobby she shared with her sisters. During the holidays Carol made sure everyone received a platter of cookies, complete with an ornament to hang on the tree. Her family became the backbone of her being that extended beyond the familial; anyone was welcome in her home, any need she could meet was met, any question asked was answered to the best of her knowledge and ability. Even after her children fledged the nest, Carol and Jim opened their home to foster children for 10 years. When not in Windham, Carol could be found on the edge of the court or the field, cheering on her grandchildren. She also enjoyed watching college competitions, especially basketball and football. Carol will be dearly missed by her children who meant the world to her: Elaine Nichols (Dave Lutzkanin), Bill (Shari) Clark, MaryHelen Clark (Mark Ryan), and Jim (Melissa) Clark; her beautiful 13 grandchildren: Katrina (Matthew) Fraley, Scott (Crystal) Williams, Amanda Williams, Taylor (Garrett) Swingle, Zachary (Cheyenne) Williams, Garrett Clark, Michael Williams, Keegan Ernest, Eryn Nichols, Jace Nichols, Samantha Clark, Sophia MacDonald, Emelia Clark; and three great-grandchildren: Sparrow, Noah, and Rosemarie. In addition, Carol is remembered by her sisters: Roberta Honnick and Dolores Martin; her sisters-in-law and brothers in-law: Susan Healy, Ruth and C. Kenneth Crain, and George Beville; and several nieces, nephews, and their families. Carol was welcomed into heaven and is now reminiscing and sharing stories of the last ten years with her husband S. James Clark, her parents, her mother-in-law: Elizabeth G. Merrill and several brothers and sisters in-law were also there to greet her. Family and friends are invited to attend a period of visitation on Saturday, December 5th from 10 to 12 pm at the Sutfin Funeral Chapel, 273 S. Main St., Nichols. Appropriate precaustions will be taken for public health concerns when at the funeral chapel to include wearing masks and social distancing. A private family service will be held at the conclusion of calling hours. The service will be streamed and can be viewed at: https://my.gather.app/remember/carol-b-clark Memories and condolences may be shared by visiting her guestbook at www.sutfinfuneralchapel.com The family requests that memorial contributions be directed to them to help plant a memory garden at their home, cards can be mailed to MaryHelen Clark at 3034 Merry Go Round Road, Rome, PA 18837.

A heart of gold stopped beating, two willing hands at rest, God broke our hearts to prove to us, He only takes the best ~ Our hearts are filled with grief at the passing of our mother, Carol B. Clark, 80, of Windham, Pennsylvania on Thanksgiving... View Obituary & Service Information

The family of Carol B. Clark created this Life Tributes page to make it easy to share your memories.

Send flowers to the Clark family.