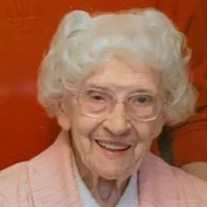 To Watch Carol's Live Stream of her funeral service: ClickHere Our loving Auntie, Carol V. Cook, 96, of Potterville, Pa passed away on Sunday, February 14, 2021 at The Homesteads in Apalachin where she had resided for the last six years. Carol was born on January 4, 1925 in Potterville, Pa- a daughter of the late John Tyler and Aline (Beckwith) Cook. She attended school in West Warren, Warren Center and was a graduate of the LeRaysville High School class of 1942. Following graduation Carol went to work at Endicott Johnson Shoe Factory with her siblings. She later spent ten years as a milk inspector for DHIA. Wanting to explore what was outside of Bradford County, Carol went to work for Delta Airlines as a ticket agent in New York City. Unsure what her path of life would be, at the age of 37, Carol was called back to school and received her teaching certificate from Mansfield University. Carol opened her heart and lovingly taught school in Warren Center and in 1970 when Northeast Bradford School opened she taught kindergarten and first grade for over twenty years there. Auntie Carol was someone who always had good stories to tell, but just as importantly she knew how to be a good listener as well. She was patient, kind and the very best friend you could ever hope to find. Always generous and hardworking, Carol shared her abundances of love with those she knew. A friendly phone call or a letter warmed the hearts of many. Friendships were formed while volunteering at Robert Packer Hospital and the Bradford County Historical Society. Carol attended the West Warren Congregational Church. She also was a member of the Warren Center Senior Citizens and the PA State Retired Teachers organization. A talented seamstress, Carol also enjoyed knitting, crocheting, completing puzzles and watching college basketball. Carol will be greatly missed by her sister Alice Brown of Rome, Pa; several nieces, nephews, great nieces, nephews and their families. She was welcomed into heaven by her parents; her brothers and sister-in-law: Ronald “Bud” T. and Joanne Cook; Bernard “Edie” R. Cook; Joseph Brown; a nephew Randy Brown. A private family service will be held on Saturday, February 20th at the Sutfin Funeral Chapel, 273 S. Main St., Nichols. The service will be live-streamed at Click Here beginning at 2 pm. Carol will be laid to rest in the Darling Cemetery. During this time of social distancing that we are all experiencing, please take a moment to connect with Carol’s family by sharing a memory at her guestbook at www.sutfinfuneralchapel.com With Carol’s love for children it would be her request that memorial contributions be directed to the Northeast Bradford Education Foundation, 526 Panther Lane, Rome, PA 18837.

To Watch Carol's Live Stream of her funeral service: [ClickHere]https://my.gather.app/remember/carol-v-cook Our loving Auntie, Carol V. Cook, 96, of Potterville, Pa passed away on Sunday, February 14, 2021 at The Homesteads in Apalachin where... View Obituary & Service Information

The family of Carol V. Cook created this Life Tributes page to make it easy to share your memories.

To Watch Carol&#39;s Live Stream of her funeral service:
ClickHere

Send flowers to the Cook family.