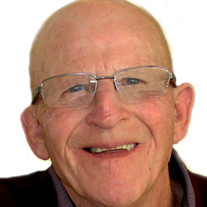 No farewell words were spoken, no time to say good bye, you were gone before we knew it, and only God knows why…..Charles K. Jones, 82, of North Orwell, Pa passed away suddenly on Thursday, May 17, 2018 at his home. Charlie, as he was affectionately known by his family and friends was born on September 19, 1935 in Sayre, Pa a son of the late Edward LeRoy and Elizabeth M. (Harrington) Jones. He was a graduate of the Rome High School Class of 1953. Following graduation, Charlie went to work at Westinghouse his work there was brief as he decided it would be better to travel the country sides visiting with area farmers and hauled milk for Crowley's as owner/operator of EL & CK Jones & Son. On March 19, 1960 a windy and frosty day, he married Mary Sackett ~ together they raised four daughters who were the apple of his eye. In 1999, following forty-two years of hauling milk Charlie retired ~ the friendships and the stories he shared over the years remain with us. Charlie was a member of the Rome United Methodist Church and the North Orwell Union Church. Charlie was a dedicated member of the Roman Lodge #418 F & AM Masonic Lodge in Rome, Pa where he served as Pastor Patron ~ he was just recognized for his sixty year membership in March. In addition he also served as Worthy Patron for Rome Chapter of Order of Eastern Star No. 26. Charlie was a friend to many, he could approach a stranger and soon following their visit they would be friends. His infectious smile and caring ways will be greatly missed by his family. He enjoyed walking, hiking and was a volunteer at the Bradford County Manor although his greatest love was being surrounded by his family. Charlie will be greatly missed by his loving wife of 58 years, Mary (Sackett) Jones; his daughters and sons-in-law: Robin and Fred Wiginton, Kalesta and Marc Retter, Carlyn and Patrick Murphy, Shelly and Todd Raymond. His grandchildren: Daniel Wiginton, Tyler (Kayla) Wiginton, Nolan Wiginton (fiancée Lauren Pallas) Lindsay Wiginton (Philip Morrissey), Alexandra Retter, Gillian Retter, Sean Murphay, Bethany Murphy, Kelsey and Jonny Leubner, Katie Raymond, Kristina Raymond and Collin Raymond; two great grandchildren: Quinten Cordon-Wiginton and Joshuah Claypool. His brother and sister-in-law: Raymond and Sharon Jones; sister and brother-in-law: Shirley and Duane Phillips; his sisters-in-law and brothers-in-law: Katherine and Floyd Burns, Nancy and Robert Archer, Joan and David Redman, Janet and Albert Campbell, Stephen Sackett and Sandy Clark; many nieces, nephews and their families also survive. Charlie was predeceased by his parents Edward LeRoy and Elizabeth M. Jones; a brother Roy Jones; Mary’s parents: Roy and Mary Sackett; his brothers-in-law: Kenneth Sackett, Karl Sackett, Keith Edward Sackett; and a sister-in-law Doris Sackett. Family and friends are invited to attend a period of visitation on Tuesday, May 22, 2018 from 5 to 8 pm at the Sutfin Funeral Chapel, 273 S. Main St., Nichols. A Masonic Service will be conducted at the beginning of calling hours. Funeral services and celebration of Charlie’s life will be held on Wednesday, May 23rd at 11 am at the North Orwell Union Church with his Pastor Rev. Philip T. Wanck, officiating. Interment and prayers of committal will follow in the Rome Cemetery. Memories and condolences may be shared by visiting his guestbook at www.sutfinfuneralchapel.com Those who wish may kindly consider a memorial contribution to the Rome Masonic Lodge, PO Box 143, Rome, PA 18837, North Orwell Cemetery, c/o Cathy Rought, 53 Roughts Hollow Lane, Rome, PA 18837 or the North Orwell Union Church c/o Cathy Rought, 53 Roughts Hollow Lane, Rome, PA 18837 in loving memory of Charles “Charlie” K. Jones.

No farewell words were spoken, no time to say good bye, you were gone before we knew it, and only God knows why&#8230;..Charles K. Jones, 82, of North Orwell, Pa passed away suddenly on Thursday, May 17, 2018 at his home. Charlie, as he... View Obituary & Service Information

The family of Charles "Charlie" K. Jones created this Life Tributes page to make it easy to share your memories.

No farewell words were spoken, no time to say good bye, you were...