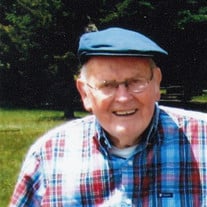 Softly in the morning, you heard a gentle call, you took the hand God offered you and quietly left us all....Charles P. Schneider, 90, of Nichols, NY passed away peacefully on Monday, April 9, 2018. Chuck, as he was affectionately known by his family and friends was born on November 7, 1927 in Binghamton, a son of the late Harry and Lucy (Pierson) Schneider. He was a graduate of Binghamton North High School and proudly served his country with the US Army. Following and honorable discharge, Chuck continued his education at Ithaca College where he received his Bachelors in Business in 1951. On September 9, 1949 he married Thelma Chapman and together they shared 68 years of marriage. Chuck served as bank manager for Owego Federal Savings and Loan from 1959 until 1987. With a passion for work, he went to work for the Community Bank and retired following twenty-seven years of service. For many years, Chuck served as the Village and Town Clerk of Nichols. In addition, he assisted many with their income tax preparations. Chuck was a devoted member of the Nichols Baptist Church and loved being a part of the Nichols Community. He will be greatly missed by his wife Thelma; his son and daughter-in-law: Ed and Debbie Schneider of Alden, NY; his daughters and son-in-law: Kathy and David Castle of Endicott, NY; Bonnie and Joel Bowman of Castle Creek, NY; Gail Boyd of Hixon, TN; his sister Audrey Price of New Hartford, NY; his grandchildren: Laura (Steve) Schoon, Steve (Jamie) Schneider, Amanda (Justin) Hoffman, Adam (Ashley) Bowman, Ryan Schneider, Aaron (Kendra) Bowman, Will Boyd, Evan Schneider, Lindsey Castle, Andrew Boyd, Jennifer (Andrew) Bednarz. His great grandchildren: Abigail, Emily, Micah, Titus, Charlotte, Logan, Zachary, and Emily. Several nieces, nephews and their families also survive. He was predeceased by his parents, an infant daughter Karen; his brothers Carlton Schneider and Malven Schneider; and a sister Lois Gregory. Family and friends are invited to attend a funeral service and celebration of Chuck’s life on Saturday, April 14th at 10 am at the Nichols Baptist Church, 90 Ro-ki Blvd., Nichols. The family will receive friends following the service and at a luncheon at the Nichols Presbyterian Church Hall. Flowers will be provided by the family and memorial contributions may be directed to the Nichols Baptist Church, PO Box 156, Nichols, NY 13812. Memories and condolences may be shared by visiting his guestbook at www.sutfinfuneralchapel.com Caring assistance is being provided by the Cooley Family of the Sutfin Funeral Chapel, 273 S. Main St., Nichols.

Softly in the morning, you heard a gentle call, you took the hand God offered you and quietly left us all....Charles P. Schneider, 90, of Nichols, NY passed away peacefully on Monday, April 9, 2018. Chuck, as he was affectionately known by... View Obituary & Service Information

The family of Charles "Chuck" P. Schneider created this Life Tributes page to make it easy to share your memories.

Send flowers to the Schneider family.