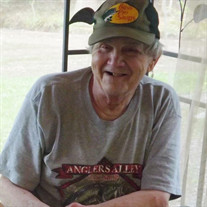 Forever in our hearts and memories…. Charles E. Reese, 83, of Sayre, Pennsylvania, passed away on Monday, November 19, 2018. Charles was born on May 14th, 1935 in Plymouth, PA, son of the late Charles and Gertrude (Eddy) Reese. Charles was proud to serve in the US Navy aboard the USS Wisconsin and the USS Sturtevant. He retired from Kennedy Valve as a machinist. Every year he looked forward to camping at Brenchley’s Lake, fishing and family time around the campfire. Charles was always finding something to tinker with, even with his declining health. In the past few year, he had formed a special bond with the staff at the Sayre VA clinic as they became like a second family to him and he praised them very highly. Charles will be greatly missed by his children: Charles (Sandra) Reese of Lockwood, PA; Susan (Jeffrey) Harding of Nichols, NY; David (Jill) Reese of Tioga Center; his grandchildren: Justin, Shawna, Stephanie, Kayla, Michael, and Jennifer; and several great grandchildren. His brothers: Jack Reese of Melbourne, FL and Kenny Reese of Plymouth, PA. Several nieces, nephews and their families also survive. Charles was predeceased by his parents Charles and Gertrude Reese and a brother, George. A gathering for friends and family will be held in Saturday, November 24th from 1pm to 2pm at the Sutfin Funeral Chapel, 273 S. Main Street, Nichols. A funeral service and celebration of Charles’ life will follow at 2pm. A private family interment will be held on Monday, November 26th at the Edgehill Cemetery in West Nanticoke, Pa. Memories and condolences can be shared by visiting his guest book at www.sutfinfuneralchapel.com

Forever in our hearts and memories&#8230;. Charles E. Reese, 83, of Sayre, Pennsylvania, passed away on Monday, November 19, 2018. Charles was born on May 14th, 1935 in Plymouth, PA, son of the late Charles and Gertrude (Eddy) Reese. Charles... View Obituary & Service Information

The family of Charles E. Reese created this Life Tributes page to make it easy to share your memories.

Send flowers to the Reese family.