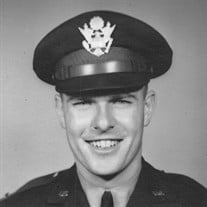 Clarence Charles Tiffany, 87, of Nichols passed away peacefully at the Oxford Veterans Home on Saturday September 9th, 2017. Clarence was born on September 11th, 1929, son of the late Glenn O. Tiffany and Elizabeth (Wolfe) Tiffany. He was predeceased by his wife Shirley Gillespie Tiffany, his sons Eric Rance Tiffany and William Clark Tiffany and his brothers Glenn and Jack. Clarence is survived by his children Gregory Tiffany and Sharon Tiffany, a daughter-in-law: Susan Tiffany; grandchildren Mallary, Elizabeth, Lucas, David, Daniel, Crystal, Matthew and Heather. As a young adult, Clarence attended Hartwick College and Syracuse University. He also served as 1st Lieutenant in the US Army during the Korean Conflict. He spent his golden years at Oxford Veterans Home in NY where his favorite activities included country music concerts and visits from his grandchildren. Clarence was a loving man, with a big heart, and will be remembered fondly for his willingness to always speak his mind. He will also be remembered for the love her shared for animals, most importantly the love shared with his eternal friends Max, and Heidi. Please consider donating to your local charity, or animal shelter in Clarence’s memory, as that is what he would have wanted. Friends may visit a photo memorial tribute and sign Clarence’s guest book on Thursday, September 14th from 2 to 3 pm at the Sutfin Funeral Chapel, 273 S. Main St., Nichols. Clarence will be laid to rest at 11 am Friday, September 15th in Glenwood Cemetery, Oneonta, NY alongside his parents and wife. Memories and condolences may be shared by visiting his guest book at www.sutfinfuneralchapel.com

Clarence Charles Tiffany, 87, of Nichols passed away peacefully at the Oxford Veterans Home on Saturday September 9th, 2017. Clarence was born on September 11th, 1929, son of the late Glenn O. Tiffany and Elizabeth (Wolfe) Tiffany. He was... View Obituary & Service Information

The family of Clarence Charles Tiffany created this Life Tributes page to make it easy to share your memories.

Send flowers to the Tiffany family.