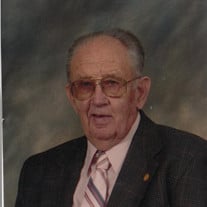 “Daddy’s hands were soft and kind when I was crying, Daddy’s hands were hard as steel when I’d done wrong. Daddy’s hands weren’t always gentle, but I’ve come to understand, there was always love in Daddy’s hands.” Our loving father, grandfather, great-grandfather, great-great-grandfather, uncle and friend, Daryl R. Parks (Pops), 94 formerly of Orange Hill and more recently of Nichols and Rome, passed away Wednesday, December 14, 2016 surrounded by his loving family, both in presence and in spirit, while a resident of the Sayre Health Care Nursing Home. Daryl Rex Parks was born at home on November 26, 1922, the only child of Aleatha Robinson Parks who passed away at his birth, and Floyd Parks. His birth took place in what was called “the house in the hollow”, which was part of the original Parks Homestead on Orange Hill, Ridge Road, Litchfield Township. He was raised by his maternal grandparents, Llewellyn and Mary Wickizer Robinson on their farm Located on Orange Hill Road, Athens Township. Daryl attended the former Orange Hill School until it was closed in 1930 due to lack of students. He was then bused to East Athens and Athens schools. He graduated from Athens High School, class of 1941. While in high school where he studied Vocational Agriculture, Daryl played the trumpet in the school band and he was awarded the Keystone Farmer Degree at the State Farm Show in Harrisburg on January 22, 1941. Daryl also attended Williamsport Technical School where he received a degree in welding. Daryl joined Diahoga Grange in 1937 and received all seven degrees before his 15th birthday that November. He became Master of Diahoga Grange in 1941, one of the youngest Masters in the state. In 2012 he was honored for 75 years of dedicated service with citations from Diahoga Grange and the PA House of Representatives. Daryl married his high school sweetheart, Doris Rolls, on September 7, 1942 at the Methodist parsonage in Athens. Doris predeceased him on June 26, 1983 after nearly 41 years of marriage and raising six children. Daryl married second, Mrs. Betty Thetga on June 3, 1989 at the Nichols Presbyterian Church. They spent 18 years together until her passing on December 01, 2007. Daryl was a well-known dairy farmer on Orange Hill, taking over the operation of the farm he grew up on. The farm was named Parksknoll Farm and he owned and operated it with his son, Donald, until 1989, when a herd dispersal was held. Daryl also drove school bus for the Athens Area School District for 14 years, was active in Boy Scouting and served as an Athens Township Supervisor from 1982-1988. He was a past member of the Litchfield I.O.O.F. He was a member of the Sayre Christian Church for many years and more recently attended the Nichols Presbyterian Church until his health no longer permitted. He enjoyed hunting, fishing, photography and woodworking. Years of home movies he took have been preserved on DVD for future generations. He also enjoyed traveling the United States in his RV, from Maine to Alaska to Florida. One of the first trips he and Doris took was to Wisconsin as a result of an ad they placed in The Hoard’s Dairyman magazine looking for fellow farmers they could visit while there. The response to that ad was amazing, and life-long friends were made on that trip. His greatest joy, however, was attending outdoor breakfasts at “Pop’s Dream” on Orange Hill with his family. The Parks/Rolls family reunion held there each summer was very important to him. Daryl will be greatly missed by his children: Judy (Richard) Tobbe of Athens and Arcadia, Fl; James (Debra) Parks of Gillett; Sandra (Walter) Robinson of South Hill; Penny (Roy) Peterman of Nordmont; a son-in-law, Dewey Russell of Rome; and a daughter-in-law, Cindy Millard of Sayre. Also surviving are step-children Carole Hosmer; Ray (Joann) Thetga; Bill (Trish) Thetga; sister-in-law Shirley Rolls, as well as a very large and loving extended family. Daryl was predeceased by his parents, Floyd and Aleatha Parks, his first wife, Doris R. Parks and second wife, Betty Thetga Parks; son and daughter-in-law Donald and E Rae Parks, Daughter Carolyn Russell, grandson, James E Parks, step-mother, Alta Parks; sister and brother-in-law, Beverly and Gerald Callear; sister-in-law and brother-in-law Leona and Bill McCreary; brother-in-law Paul Rolls; aunts Martha and Lenora Parks; and his faithful companion, Daisy May. We would like to extend our sincere gratitude to the staff of Sayre Health Care Center for their loving care of our father. As well as the Towanda/Guthrie Hospice staff and volunteer caregivers. Family and friends are invited to attend a period of visitation on Wednesday, December 21, 2016 from 11 to 12 pm at the Sutfin Funeral Chapel, 273 S. Main St., Nichols. A funeral service and celebration of Daryl’s life will follow at 12 pm with his Great Grandson, Joshua Ford, officiating. Interment will follow in the Orange Hill Cemetery. The family will supply their own flowers and ask that you kindly consider a donation to The Orange Hill Cemetery, c/o Mr. Alan Bradley, Ridge Road, Athens, PA 18810. Memories and condolences may be shared by visiting his guest book at www.sutfinfuneralchapel.com ~ this obituary and tribute was written by Carolyn prior to her passing.

The family of Daryl R. Parks created this Life Tributes page to make it easy to share your memories.

“Daddy’s hands were soft and kind when I was crying, Daddy’s...