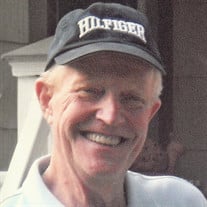 Those we love don’t go away, they walk beside us every day, unseen, unheard but always near, so loved, so missed, so very dear…….David J. Bredbenner, 75, of Athens, PA passed away peacefully with his family at his side on Tuesday, February 28, 2017 at the Elderwood Healthcare Facility in Waverly. David was born on September 13, 1941 in Frackville, PA a son of Henry Tyson and Virginia Smith. On July 22, 1966 in Wilmington, Delaware he married JoAnn and together they made their home in Hoosick Falls, NY. A talented woodworker, David also enjoyed fishing and reading. He served as president of the Hoosick Falls Little League and was a member of the Eagles in Hoosick Falls. He will be greatly missed by his wife JoAnn of nearly 51 years of Athens, PA; his daughters and sons-in-law: Marie and Jeff Pierson of Nichols; Amy and Gary Wilson of Binghamton; a son and daughter-in-law: David Jr. and Tammy Bredbenner of Pownal, VT; a sister and brother-in-law: Eleanor and John Young of Jeanette, Pa; his grandchildren: Evan (Tiffany) Smith, Brandon Smith, Shelby Smith; Lauren Bredbenner, Garret Bredbenner; Deanna (Robbie) Edwards and Joseph Alexander; eleven great grandchildren; several nieces and nephews. He was predeceased by his parents; and his brothers Daniel and James and a sister Eileen. A gathering and time of sharing memories will be held on Friday March 3, 2017 from 5 – 8pm at the Nichols Fire Hall. Memories and condolences may be shared by visiting his guest book at www.sutfinfuneralchapel.com Those who wish may kindly consider a memorial contribution to the Nichols Fire Dept. PO Box 334, Nichols, NY 13812 Caring assistance is being provided by the Cooley Family of the Sutfin Funeral Chapel, 273 S. Main St., Nichols.

Those we love don&#8217;t go away, they walk beside us every day, unseen, unheard but always near, so loved, so missed, so very dear&#8230;&#8230;.David J. Bredbenner, 75, of Athens, PA passed away peacefully with his family at his side on... View Obituary & Service Information

The family of David Joseph Bredbenner created this Life Tributes page to make it easy to share your memories.

Those we love don’t go away, they walk beside us every day, unseen,...

Send flowers to the Bredbenner family.