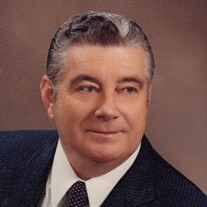 Any man can be a father but it takes someone special to be a Dad ..... With his daughters by his side, David Smith Hollenshead, 91, of Warren Center, Pa went to his heavenly home on Friday, April 14, 2017. David was born on April 1, 1926 in Needmore, PA a son of the late Rev. David and Blanche (Smith) Hollenshead. Following graduation from Warfordsburg High School, David enlisted into the US Army and proudly served his country from 1944-1946. On December 22, 1945 he married Raymeta Chaffee and together they shared fifty one years of marriage until her passing on January 24, 1997. Following an honorable discharge, David continued his education at Dickinson College where he received his Bachelors degree in 1948. A knowledgeable to prestigious man, David began his banking career with the Federal Reserve Bank in Philadelphia (1948-1950) and served as Executive Vice President for the York Bank and Trust Company (1958-1975); President (1975-1984); Chairman of the Board (1980-1984) and Chief Executive Officer (1984). In addition, he also was past president of the LaFayette Club of York and past president of the York Chapter of Sertoma; Vice Chairman of the Board of Directors for Continental Bancorp, Inc. in Philadelphia. Proud of his community, David also served as director for the York County Industrial Development Corp., Small Enterprise Development Corp, El-Ge Potato Chip Company, Inc., Laurel Fish and Game Association and Better York. Following Raymeta’s passing, David enjoyed dining out and met Irene, together they enjoyed fourteen years of marriage. David and Irene enjoyed traveling and spending time with family. David’s heart was once again broken on October 15, 2012 when Irene had passed away. David will be greatly missed by his daughters and son-in-law: Karen and Scott Smith of Saranac Lake, NY; Kathy Cowher of Warren Center, Pa; his step children: Edward and Linda Kutney of St. James City, Fla; Diane and Robert Sloma of Binghamton; his grandchildren: Daniel Smith, Charles (Morgan) Smith; Jennifer Cowher Williams; David (Cassandra) Cowher; step grandchildren: David Kutney, Jr., Steven Sloma and Audrey Sloma; his great grandchildren: Kella Williams, Daniel Cowher and Rebecca Cowher; several nieces, nephews and cousins also survive. David was predeceased by his parents; brother John (Sylvia) Hollenshead, grandson-in-law R. Felder Williams and step son David Kutney. Family and friends are invited to attend a memorial service and celebration of David’s life on Friday, July 14th at 1pm at the Dille Parish United Church of Christ, Potterville, Pa with his Pastor Rev. Tom Burlington, officiating. A private family interment was held in the Neath Cemetery. Memories and condolences may be shared by visiting his guest book at www.sutfinfuneralchapel.com Those who wish may remember the Dille Parish United Church of Christ Emergency Fund, 903 Main St., LeRaysville, PA 18829 or a charity of one’s choice. Our hearts were grateful for the love and care given to Dad while he resided at Good Shepherd Fairview and to the loving care he received from Lourdes Hospice in his final days. Caring assistance is being provided by the Cooley Family of the Sutfin Funeral Chapel, 273 S. Main St., Nichols.

Any man can be a father but it takes someone special to be a Dad ..... With his daughters by his side, David Smith Hollenshead, 91, of Warren Center, Pa went to his heavenly home on Friday, April 14, 2017. David was born on April 1, 1926 in... View Obituary & Service Information

The family of David Smith Hollenshead created this Life Tributes page to make it easy to share your memories.

Any man can be a father but it takes someone special to be a...

Send flowers to the Hollenshead family.