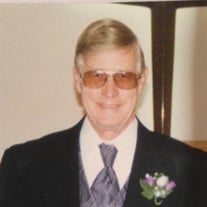 David E. Hunsinger, 77 Surrounded by his family and those that meant the world to him, David E. Hunsinger, 77, of Litchfield Twp., Athens, PA passed away at his home on Friday, November 6, 2015. David was born on March 18, 1938 in Barton, NY, a son of the late Kenneth W. Hunsinger and Hazel Shafer. He attended school in Sayre and proudly served his country with the US Navy on the USS William C. Lawe and was honorable discharged in 1958. David retired in 1993 from GTE Sylvania where he was employed as a Graphic Artist - Draftsman. He enjoyed bowling, archery ~ was a NYS Champion, enjoyed flying and had his Student Pilot’s license. His greatest pleasures were found at home, being surrounded by Yellow Cat and Booker, and the wildlife that would visit him. David will be greatly missed by his wife of nearly 29 years, Kathryn (Rolls) Hunsinger; his children: Tawnya (Jason) Broyles of Rapid City, S. Dakota; David (Amy) Hunsinger of Wyalusing, PA; Christine Merrill-Beers of Athens; Kevin (Michelle) Merrill of Litchfield; his brother Lavern and his wife Jimmie Hunsinger of Lake City, Florida; his his special grandchildren: Megan Dowell, Krystal (John) Montgomery, Natasha Root, Mason Broyles, Alex Hunsinger, Ayden Hunsinger, Dylan Beers, Logann M. Beers, Cassandra Merrill, Kendra Merrill; great grandchildren: Caine, Lily, Sam, Hunter and Skyler. His mother-in-law: Shirley Rolls of Litchfield; sisters-in-law and brothers-in-law: Paula and Joseph Kraus of Athens; Theresa and John Hunsinger of Milan; Kelly and Edward Seeley of Waverly; several nieces, nephews and their families also survive. David was predeceased by his father Kenneth Hunsinger; mother Hazel Shafer, father-in-law: Paul E. Rolls; step brother Charles Welch and step sister Peggy Davis. Family and friends are invited to attend a period of visitation on Tuesday, November 10th from 7 – 9 pm at the Sutfin Funeral Chapel, 273 S. Main St., Nichols. A period of visitation will also be held on Wednesday, from 1 – 2 pm. A memorial service and celebration of his life will be held at the conclusion of calling hours at 2 pm with Pastor James Donahoo, officiating. Interment and prayers of committal will follow in the Orange Hill Cemetery. Memories and condolences may be shared by visiting our website at www.sutfinfuneralchapel.com Those who wish may kindly consider a memorial contribution to the Bradford County Human Society, PO Box 179, Ulster PA 18850 or Stray Haven, 194 Shepard Rd, Waverly, NY 14892 in loving memory of David E. Hunsinger. .

David E. Hunsinger, 77 Surrounded by his family and those that meant the world to him, David E. Hunsinger, 77, of Litchfield Twp., Athens, PA passed away at his home on Friday, November 6, 2015. David was born on March 18, 1938 in Barton,... View Obituary & Service Information

The family of David E. Hunsinger created this Life Tributes page to make it easy to share your memories.

Surrounded by his family and those that...

Send flowers to the Hunsinger family.