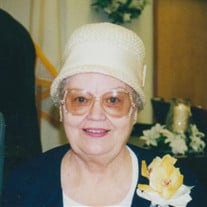 “… those who wait on the LORD shall renew their strength; they shall mount up with wings like eagles, they shall run and not be weary, they shall walk and not faint.” (Isaiah 40:31) Dolores Mary Simons Beckwith, 82, of Tyrrell Hill, Rome, PA, passed away at home May 20, 2015, following a lengthy period of declining health. Born Christmas Day 1932 at her grandparents’ (Mikelonis) farm at the corner of Kadar and Hall Roads in Orwell Township, Dolores was the oldest of four children born to David A. and Helen Mikelonis Simons Sr. Shortly after graduating from Rome High School, Class of 1952, Dolores married Hugh Floyd Beckwith on June 28, 1952, at the Windham Community Church. They initially set down roots in Litchfield where they farmed the land until 1961 when they moved to their present home on Tyrrell Hill. Dolores was a member of the Windham Center Ladies Aid Society. Dolores loved to crochet doilies, afghan’s and doll clothes. She could often be seen ripping out rows and rows of work when she discovered a seemingly miniscule mistake, but nothing short of perfection would do in her handiwork. In her early years, she made rag rugs and others made from several strands of string. In later years, she found delight working with plastic canvas until her diminished eyesight prevented her from continuing those joys. Decorating for holidays, especially Christmas, and playing hostess to large feasts at those holidays or at picnics in the summer were sure to put a smile on her face. It was always an adventure for her to browse through her massive collection to try new recipes on her guests. But despite the vast array of foods she served, the spread would be lacking if she did not also offer her infamous macaroni-n-cheese that came to be expected. Surviving in addition to her husband of 62 years are their four children and spouses, Joseph and Alyce Beckwith of Towanda, Thomas and Deanna Patton of Towanda, Julia and Frank Ripa of Rome, and Kathleen and George Garra of Wysox; brothers, Louis “Bud” Simons of Laporte, Harold Simons of Orwell Hill and David (Carol) Simons of Orwell Hill; 16 grandchildren and step-grandchildren, Scot (Judy) Miller, Angel Miller, Starr Walters, William Hagadorn, Velvet (Brandon) Segur, Luke Beckwith, Joshua Patton, Kristina Patton, Jennifer (Adam) Morkert, Jeremiah (Pamela) Nelson, Mark (Ruthy) Nelson, Justin McNeal, Samuel Ripa, Joseph (Teresa) Garra, Christine Sprague, Roxanne Joniec; 17 great-grandchildren and step-great-grandchildren, Scot Miller II, Brianna Miller, Ryan Walters, Skylar Walters, Dayla Walters, Sadie Segur, Jessica Olson, Nathan Olson, Riley Nelson, Cameron Nelson, Steven Nelson, Alicia Nelson, Tyler Nelson, Madison Garra, Allison Garra, Kammison Garra, and Emerson Garra; five step-great-great-grandchildren, Autumn Fuller, Alisha Sprague, Karleigh Joniec, Adrianna Joniec, and John Cameron; two step-great-great-great-granddaughters, Lily Fuller and Kaylee Sprague; brothers- and sisters-in-law, Robert and Emma Beckwith, Philip and Pat Beckwith of Rome, Brian Beckwith of Windham, Mike and June Beckwith of Erie, Colorado, and Elmer and Mary Folk of Fort Wayne, Indiana; as well as numerous nephews, nieces and cousins. She was preceded in death by her parents. Family and friends are invited to attend a period of visitation on Saturday, May 23, 2015 from 10 - 12 pm at the Orwell Bible Church. Funeral services will follow at 12 noon with Pastor Richard Vieldhouse officiating. Interment and prayers of committal will follow in the Darling Cemetery, on land once owned by her Poppy and Grammy Mikelonis. Memories and condolences may be shared by visiting our website at www.sutfinfuneralchapel.com Friends who wish may remember the Orwell Bible Church, 1749 Orwell Hill Road, Rome, PA 18837 or Guthrie Hospice, 421 Tomahawk Rd., Towanda, PA 18848 in loving memory of Dolores Mary Simons Beckwith. Caring assistance is being provided by the Cooley Family of the Sutfin Funeral Chapel, 273 S. Main St., Nichols, NY 13812.

The family of Dolores Mary Beckwith created this Life Tributes page to make it easy to share your memories.

“… those who wait on the LORD shall renew their strength; they...

Send flowers to the Beckwith family.