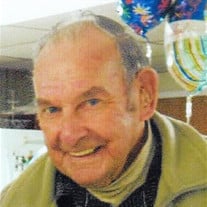 Softly in the morning, you heard a gentle call, you took the hand God offered you, and quietly left us all…. Donald R. “Bucky” Scovell, 84, of Nichols, NY passed away peacefully in his sleep on Monday, July 22, 2019 at the Elderwood Healthcare Facility in Waverly. “Bucky” as he was lovingly known by his family and friends was born on April 21, 1935 in Endicott, New York a son of the late Harry and Evelyn (Allen) Scovell. Bucky was a graduate of the Owego Free Academy High School class of 1954. On April 3, 1965 he married Vivian R. (Olmstead) Campoli and together they have shared 54 years of marriage. A hard working and dedicated man, Bucky was a heavy equipment operator and oversaw such projects as the construction of the Oakdale and Town Square Malls. In his spare time, Bucky enjoyed fishing, hunting and building ponds, although his greatest pleasure was being surrounded by his family. Bucky was a member of the Operating Engineers Union and a charter member of the Nichols Fire Department. He served as chief of the fire department in the early 1970’s and was the active chief during the 1972 flood. Bucky will be greatly missed and forever remembered by his loving wife Vivian R. Scovell; his son James Campoli of Nichols; a daughter and son-in-law: Kelly (Scovell) and Edward Smith of Smithboro; his grandchildren: Brian Hill and Shannon Bell of Syracuse, NY; Phelan and Joy Hill of Texas; Angela and Kris Engelbert of Nichols, NY; his great grandchildren: Adam, Madalyn, Mollie, Oliver, Lincoln, Avery, Vivian, Riley, Gia, Abigail and Emily; his very loving four legged friend Brandygirl; several nieces and nephews, among them a special nephew Larry (Joyce) Scovell. Donald was predeceased by his parents and his siblings: Arthur M. Scovell; Larry A. Scovell and Arleigh J. Kellam. Family and friends are invited to attend a period of visitation and time of sharing memories on Thursday, July 25th from 6 to 8 pm at the Sutfin Funeral Chapel, 273 S. Main St., Nichols. A funeral service and celebration of his life will be held on Friday, July 26th at 11 am at the Sutfin Funeral Chapel with Pastor Jon Austin, officiating. Memories and condolences may be shared by visiting his guestbook at www.sutfinfuneralchapel.com Those who wish may kindly consider a memorial contribution to the Nichols Fire Dept. PO Box 334, Nichols, NY 13812 in loving memory of Donald R. ‘Bucky” Scovell.

The family of Donald "Bucky" R. Scovell created this Life Tributes page to make it easy to share your memories.

Send flowers to the Scovell family.