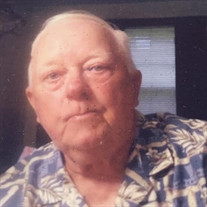 Goodbyes are not forever, goodbyes are not the end. They simply mean we'll miss you until we meet again.... Surrounded by his family and those that meant the world to him, Donald Francis Shaffer, 88, of Towanda passed away on Friday, February 5, 2021. Don was born at home in New Albany, Pa on June 11, 1932 a son of the late Jesse and Lida (Steele) Shaffer. He attended school in Camptown and the Wyalusing High School until the 10th grade. On April 7, 1954 Don was called to serve his country with the US Army, he proudly served until March 24, 1956 when he was honorable Discharged. Following his discharge, Don was employed by IBM Owego where he was a custodian. On March 28, 1959 his world was made all the brighter when he married Frances Wright. Together they shared sixty-two years of marriage and created many wonderful memories. Don had a strong work ethic and always wanted to kept busy. He held various work positions throughout his life, at one time he served as a Flagman for the Pennsylvania State Highway. Don’s longest employment was when he served as an inspector for Masonite for sixteen years. Always caring a smile, Don also brightened the days of the teachers, students and staff at Northeast Bradford School system where he would deliver mail and supplies to the schools and assisted in the cafeteria too. At the age of 12, Don received his first guitar ~ which gave him great comfort and support thru his life. He loved to sing hymns and would often sing with Pastor George Ayers at the Gibson Corners Church. Don also attended the Orwell Bible Church and the United with Christ Church in Wysox. Don treasured his family and always looked forward to family gatherings. Don’s heart was warmed when he had family near ~ he always had a way of making others laugh and their hearts would fill with glee with the stories he shared. Don also looked forward to hunting, spending time cultivating his garden and listening to country music. He will be greatly missed by his loving family to include, his loving wife of 62 years, Frances; his daughter: Cindy (Forrest) Arrison and their children: Jessica (Joe) Igaya, Caleb (Rebekah) Arrison, great grandchildren: Joleen, Arjoe, Kianna, Noa, Kaden, Declan, Lilli. His daughter Sheila (Steve) Carter; and their children: Nicole (Jason) Kneller, Kristen Carter (Patrick) and great grandchildren: Jaydon and Wesson. His daughter Sharon (Lloyd) Johnson; and their children: Justin (Roselyn) Johnson; Jennifer Johnson, Jamie (Anthony) Napolitano, Daniel Johnson; and their great grandchildren: Jackson, Hunter, Layla, Dominic, Zoe, Zayden. His Son ~ Donald Jr. (Laura) Shaffer; and their children: Nicholas, Quinn, Leighann, Lynsi, Christian, Daniel, Jacob. Great grandchildren: Isaiah, Isah and Camdon. His brother-in-law: H. Donald Wright; many nieces, nephews and their families also survive. Don was welcomed into heaven by his parents; his infant brother Melvin; brother Robert Shaffer and sisters: Gladys Wright and Edna Monahan. A celebration of Don’s life will be held on his birthday at a placed to be determined. Memories and condolences may be shared by visiting his guest book at www.sutfinfuneralchapel.com Those who wish may kindly consider a memorial contribution to Guthrie Hospice, 421 Tomahawk Rd, Towanda, PA 18848 in loving memory of Donald F. Shaffer.

Goodbyes are not forever, goodbyes are not the end. They simply mean we'll miss you until we meet again.... Surrounded by his family and those that meant the world to him, Donald Francis Shaffer, 88, of Towanda passed away on Friday, February... View Obituary & Service Information

The family of Donald F. Shaffer created this Life Tributes page to make it easy to share your memories.

Send flowers to the Shaffer family.