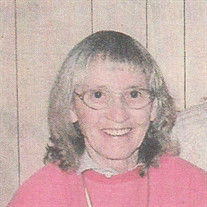 Dora O. Landers, 88, of Towanda, PA passed away on Friday, February 10, 2017 at the Towanda Personal Care Home following a brief period of declining health. Dora was born on April 11, 1928 in Potterville, PA one of ten children to Lena (Cragle) and Elmer Bolton. She was a graduate of LeRaysville High School and a 1950 graduate of the Robert Packer School of Nursing. Dora will be remembered for her polite manner and warm smile she shared with those that she met. She treasured the time spent with her family and always looked forward to family gatherings. Dora was a volunteer for many years at the Rainbow End in Towanda and with her son Richard served as Red Kettle bell ringers at Christmas time. Dora is survived by her son Richard Landers, Jr. of Towanda, Pa; her daughter Debra (David) Johnson of Baldwinsville, NY; her sister: Betty Yanavatich of LeRaysville, PA; three brothers: Edward Bolton of Warren Center, Pa; Ray Bolton of LeRaysville, Pa; Darius (Joyce) Bolton of Ulster, Pa; three granddaughters: Jennifer Hildreth, Laura Johnson, Kristin (Brian) Strowbridge; four great grandchildren: David, Eric, Elizabeth Hildreth and McKenzie Strowbridge. A niece Glenda (Geoff) Davis; Nephews Douglas Bolton, Ronald Bolton; Michael (Deb) Bolton and their son Cameron Bolton. She was predeceased by her husband Richard; her parents; sister Reda Jane; brothers: Ralph, Earl, Cleatis, and Roy. The family wishes to extend a special thank you for the support shown to us during this most difficult time. Abiding with Dora’s wishes, there will be no services. A private family celebration of her life will be held at the convenience of the family. Memories and condolences may be shared by visiting her guest book at www.sutfinfuneralchapel.com In lieu of flowers memorials may be directed to Trinity Evangelical Lutheran Church, 908 Main Street, Towanda, PA 18848 or a charity of one’s choice in loving memory of Dora O. Landers.

Dora O. Landers, 88, of Towanda, PA passed away on Friday, February 10, 2017 at the Towanda Personal Care Home following a brief period of declining health. Dora was born on April 11, 1928 in Potterville, PA one of ten children to Lena... View Obituary & Service Information

The family of Dora O. (Bolton) Landers created this Life Tributes page to make it easy to share your memories.

Send flowers to the Landers family.