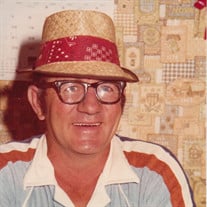 A heart of gold stopped beating, two willing hands at rest. God broke our hearts to prove to us, He only takes the best ~ Our loving husband, dad and gramps E. Preston Russell, 82, of LeRaysville, PA passed away on Saturday, December 3, 2016. “Buck” as he was affectionately known by his family and his community was born on April 25, 1934 in Endicott, NY a son of late Mildred (Lines) and Paul Monroe and Clarence Russell. Buck was a graduate of the LeRaysville High School Class of 1954 where he participated in basketball, baseball and at one time tried amateur boxing. He also was a talented roller and ice skater. On September 30th 1955 in LeRaysville, he married Shirley A. Hennip and together they have shared many happy memories. A life long farmer, Buck owned and operated a dairy farm in LeRaysville. Following many years of hard work and dedication to farming he left the farm to work in construction and later assisted a friend in the excavating business. Buck was a dedicated member of the LeRaysville community and many could count on his guidance and expertise when something needed to be completed. He was a long time member of the LeRaysville Pike Volunteer Fire Company and served on the LeRaysville Boro Council for many years. Buck’s greatest joy was having his children and grandchildren share around the dining room table whether it was for a family get together or to watch the many deer and turkeys that would visit his yard. He will always and forever be in our hearts ~ Buck will be greatly missed by his loving wife of 61 years Shirley A. Russell; his children: Sandra Lockwood; Doug and his wife Shawn Russell; and Patrick Russell all of LeRaysville, Pa; his special grandchildren: Michael (Stacy) Allis, Stacy (Jay) Lardizabal, Chad (Angela) Allis, Mamie (Paul) Burgert, Mia (Ben) Beebe, Dillon (Liz) Lockwood, Preston (Pallave) Lockwood, Roxanne (Charles) Lockwood, Duke (Ashley) Russell, Garrett Russell, Ariel (Blayne) McEntire; many great grandchildren and great great grandchildren. He is also survived by his brother and sister-in-laws: Harvey (Teri) Hennip, Carol (Don) Smith, Betty Bowen, Bill Hennip, Gary (Marianne) Hennip. Preston grew up with many of his aunts and uncles and had a special friendship with his uncle Hoover (and Verna) Lines ~ whom was more like a brother to him and dear friend Bridget Worthington. Preston was predeceased by his parents, his daughter Debra Allis; son-in-law: Patrick Lockwood, a great grandson Colby Stork, brother-in-law Arthur Bowen and his mother-in-law and father-in-law Harvey and Anna Hennip. Family and friends are invited to attend a period of visitation and time of sharing memories on Wednesday, December 7th from 11 to 1 pm at the Sutfin Funeral Chapel, 273 S. Main St., Nichols. A funeral service and celebration of his life will follow at 1pm with Rev. Tom Burlington, D. Min. – Pastor of the The Dille Parish United Church of Christ, officiating. Interment will follow in the Stevens Cemetery. Memories and condolences may be shared by visiting his guest book at www.sutfinfuneralchapel.com Those who wish may kindly consider a memorial contribution to the LeRaysville-Pike Vol. Fire Co., PO Box 24, LeRaysville PA 18829, HOPS Ambulance HOPS c/o James Seipler, 6185 Herrickville Road, Wyalusing, PA 18853 or the Northeast Bradford Education Foundation, Diana Dewing, 141 Morris Road, Rome, PA 18837 in loving memory of E. Preston “Buck” Russell.

A heart of gold stopped beating, two willing hands at rest. God broke our hearts to prove to us, He only takes the best ~ Our loving husband, dad and gramps E. Preston Russell, 82, of LeRaysville, PA passed away on Saturday, December 3,... View Obituary & Service Information

The family of E. Preston Russell created this Life Tributes page to make it easy to share your memories.