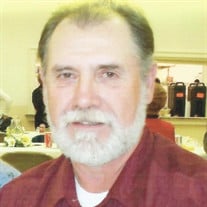 When I come to the end of the road, and the sun has set for me, remember the love that we have shared, and that will comfort thee... Edward Dale Parks, 69, of Rome, son of Clarence “Joby” and Ethel (Wilbur) Parks, gently passed away following a valiant 30-year battle with Parkinson’s, on Saturday, January 9, 2021 at the Skilled Nursing Unit of Towanda Guthrie Hospital. His two children and other family members were able to be with him in his final days. Ed was born April 1, 1951 at the Robert Packer Hospital in Sayre and spent his entire life in Rome. He graduated from Northeast Bradford High School in 1969. He worked at DuPont in Towanda for 16 years before opening his own construction company, which he ran until his Parkinson’s advanced. Ed was an avid hunter, fisherman, and outdoorsman which took him often to Canada, Montana, Idaho, and other places. He also enjoyed golf and watching NASCAR. Additionally, he enjoyed being able to bring family and friends together with daylong barbecues, where he was the king of the grill and master of hospitality. Ed was an anchor of the large Parks family. He is predeceased by his parents Clarence “Joby” and Ethel (Wilbur) Parks and his older brother Manny Parks. Ed is survived by his older brother Will Parks (Linda Derrick), his younger sister Cindy Parks Yoder, his youngest sister Michelle Parks (Jerry Smith), his longtime companion and caregiver Carol Dimon, his two children Sherry (Matt) Middlebrook and Darren Parks (Darla Sayers), and his four granddaughters Alexandra, Megan, Mayci, and Sienna. Ed’s memory also lives on with his uncle and aunt Norm (Bud) and Marcia Parks, his aunt Nancy Post, along with numerous nephews, nieces, cousins, and their families. Ed’s family wishes to express its sincere gratitude for the tender and dedicated care he received at the end of his life from the staff at Towanda Skilled Nursing. They went above and beyond, especially given all the COVID restrictions, to ensure he could have as much family contact as possible in his final months and days. He will be missed greatly by his large circle of family and friends. A period of visitation and time of sharing memories will be held on Wednesday, March 31st from 5 to 7 pm at the Sutfin Funeral Chapel, 273 S. Main St., Nichols. Appropriate precautions will be taken for public health concerns when at the funeral home to include wearing masks and practicing social distancing. A private family service will be held on his birthday, April 1st with his nephew, Pastor Terry Parks, officiating. Ed will be laid to rest at a later date in the Towner Hill Cemetery. We would love to have you share your favorite stories by visiting his guest book at www.sutfinfuneralchapel.com Those who wish may kindly consider a memorial contribution to the The Michael J. Fox Foundation https://www.michaeljfox.org/ P.O. Box 5014, Hagerstown, MD 21741-5014 in loving memory of Edward D. Parks’ memory.

When I come to the end of the road, and the sun has set for me, remember the love that we have shared, and that will comfort thee... Edward Dale Parks, 69, of Rome, son of Clarence &#8220;Joby&#8221; and Ethel (Wilbur) Parks, gently passed... View Obituary & Service Information

The family of Edward Dale Parks created this Life Tributes page to make it easy to share your memories.