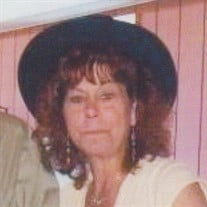 Eleanor W. "Starr" (Rogers) Shedden, 49, of South Main Street, Nichols, passed away on Friday, April 3, 2015 at the Robert Packer Hospital, Sayre, following a period of declining health. “Starr” as she was affectionately known by her family and friends was born on October 16, 1965 in Waverly, NY a daughter of Jack Lee Rogers and the late Edna Eleanor “Ellie” (Besanson) Rogers. She was a graduate of Union Endicott High School class of 1983 and received her associates degree in Nursing Administration. Starr enjoyed horses, tending to her salt water aquarium, spending time in her garden, although her greatest pleasure was being with her family and grandchildren. She was a former employee at Harvard Manufacturing in Owego. Starr will be greatly missed by her husband Scott L. Shedden, Sr; her father and step mother: Jack and Lorrie Rogers of Endicott; her children: Elizabeth and her husband Chris Brown of Florida; R.J. Decker and Beth Gustin of Horseheads; Josh Decker of Nichols; Scott L. Shedden, Jr., of Tioga Center; Devon J. Shedden; Trevor R. Shedden; and Ryliegh Shedden all of Nichols. Her brothers and sisters-in-law: Chad J. and Sue Rogers of Rome, Pa; Jack “Lee” and Katie Rogers of Hillcrest, NY; her special grandchildren: Chayce, Lilly, Carson and Allison. Her sisters-in-law and brothers-in-law: Sandy and Vic Morey; Sherri and Bob Harris all of Owego; James and Mary Shedden of TN; her former mother-in-law and father-in-law: Ray and Peggy Decker of Windham, Pa; several aunts, uncles, nieces, nephews and cousins also survive. Starr was welcomed into heaven by her mother Edna Eleanor “Ellie” Rogers and her mother-in-law Sue Shedden. Family and friends are invited to attend a period of visitation on Wednesday, April 8th from 11 to 1 pm at the Sutfin Funeral Chapel, 273 S. Main St., Nichols. A funeral service and celebration of her life will follow at 1 pm with Pastor Jon Austin of the Lounsberry United Methodist Church, officiating. Interment and prayers of committal will follow in the Nichols Cemetery. Memories and condolences may be shared by visiting our website at www.sutfinfuneralchapel.com Those who wish may kindly consider a memorial contribution to their local chapter of the American Cancer Society in loving memory of Eleanor W. “Starr” Shedden.

The family of Eleanor "Starr" W. Shedden created this Life Tributes page to make it easy to share your memories.

Send flowers to the Shedden family.