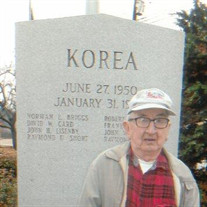 Emil “Shorty” Jerkes, 94, passed away following a period of declining health on Sunday, January 5, 2020 at the Robert Packer Hospital, Sayre, PA. “Shorty” as he was affectionately known by his family and friends was born on April 21, 1925 in Sumerset, PA one of eleven children to John and Rosa (Ormus) Jerkes. He proudly served his country in the US Army for seven years. Following an honorable discharge and return home to Tioga Center, Shorty met his future bride Alice Bixby at the local auction in Barton. Alice often would say, “she was picked up at the auction” and on January 5, 1963 he married Alice and together they celebrated 57 years and sadly, he passed away on their wedding anniversary. Emil treasured his family, a true “jack of all trades” he enjoyed gardening, woodworking, fishing, and camping with his good friends Ed and Pat Greene. He will be greatly missed by his wife Alice, his daughter and son-in-law: Lori and Duane Castle; his son Tony Jerkes; his grandchildren: Andy (Rebecca), Amanda (Justin), Bradley (Fallon), Rebecca, and Benjamin, fifteen great grandchildren, several nieces, nephews and friends also survive. Emil was welcomed into heaven by his parents, eight brothers, two sisters and nephews Joey and Mike. Family and friends are invited to attend a period of visitation on Thursday, January 9th from 11 to 1 pm at the Sutfin Funeral Chapel, 273 S. Main St., Nichols. A memorial service and celebration of his life will follow at 1 pm with Pastor Marlene Ciranowicz, officiating. A private family interment will be held at the Woodlawn National Cemetery. Memories and condolences may be shared by visiting his guestbook at www.sutfinfuneralchapel.com Those who wish may kindly consider a memorial contribution to the VFW Post 1371, 207 Main Street, Owego, NY 13827 in loving memory of Emil “Shorty” Jerkes.

The family of Emil "Shorty" J. Jerkes created this Life Tributes page to make it easy to share your memories.

Emil “Shorty” Jerkes, 94, passed away following a period of declining...

Send flowers to the Jerkes family.