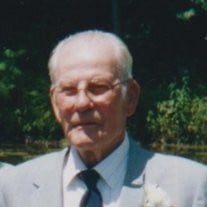 When someone you love becomes a memory…..the memory becomes a treasure~Frank L. Blow, of Nichols, beloved husband, father, grandfather, great grandfather and respected friend passed away peacefully at his home Wednesday morning, February 27, 2013 at the age of 89. Frank was born on March 4, 1923 and was one of eleven children of Percy M. and Elizabeth (Rosengrant) Blow. Frank was a long time employee of Tioga Feed Mills and the A-Jax Foundry. He loved the outdoors and spending time hunting and fishing with his son and grandson William. Frank was a talented “Mr. Fix-it” and could repair anything with a motor. He enjoyed tending to his yard and riding his lawn mower whenever the sun was shining. He will be greatly missed by his family and friends. Frank is survived by his loving wife of 52 years, Harriet Blow; his sons: Jeffrey (Kathy Sharp) Blow of Nichols; Frank Blow, Jr. of Georgia; his daughter and son-in-law Elaine and Chuck Frisbee of Owego; his brothers: Arthur, Burton and David and a sister Janey Douglas. His grandchildren: Tammy and Terry Sheets, Mary Cinelli, Larry Blow, Stephanie Hill, Heather Blow, William Blow, Connie and Steve Savage, Cheryl and Jack Gunther, Lisa and Jim Fredenburg; fifteen great grandchildren. Several nieces, nephews and his feline companion Lucy also survive. Frank was predeceased by his parents, his daughters Mary Jane Blow and Jennie Madigan; five brothers and a sister. Abiding with Frank’s wishes, there will be no funeral services. A time of sharing and a gathering for family and friends will be held at a later date. Memories and condolences for Frank’s family may be shared by visiting our website at www.sutfinfuneralchapel.com Those who wish may kindly consider a memorial contribution to Stray Haven, 194 Shepard Rd., Waverly, NY 14892 in loving memory of Frank L. Blow.

The family of Frank L. Blow created this Life Tributes page to make it easy to share your memories.

When someone you love becomes a memory…..the memory becomes a...

Send flowers to the Blow family.