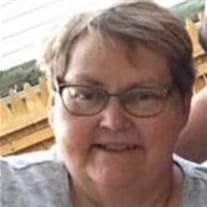 Gail Ann (Sawyer) Chase, 68, of Trinity, NC and formerly of Nichols, NY passed away on Saturday, April 14, 2018, at Kindred Hospital in Greensboro. Gail was born January 5, 1950, in Sayre, Pennsylvania, the daughter of the late Howard Earl and Hilda (Kresge) Sawyer. Gail received her Bachelor’s degree from Russell Sage College in Troy, NY, and her Master’s degree from Elmira College in Elmira, NY and retired from Tioga Central Middle School where she touched many lives. She is survived by her husband, Ronald J. “Ron” Chase, whom she married on June 30, 1973; three children, Christopher Chase and his wife, Candace, of Davidson, NC, Nicholas Chase and his wife, Ashley of Endicott, NY, and Abigail Chase and her fiancé, Michael Johnston, of High Point; two grandchildren, Hayden and Addison Chase; three step-grandchildren, Cade Lewis, Clark Hudson and Ruby Johnston; one niece, Marcy Hill and her husband, Steve; one nephew, Mike Sawyer, both of Nichols, NY; and a sister-in-law, Lois Chase Heiple, and her husband, Tom, of High Point. In addition to her parents, she was preceded in death by a brother, Jack Sawyer. Family and friends are invited to attend a period of visitation on Tuesday, April 24, 2018 from 6 to 8 pm at the Sutfin Funeral Chapel, 273 S. Main St., Nichols. A memorial service and celebration of Gail’s life will be held on Wednesday, April 25th at 11 am at the Nichols United Methodist Church, Main St., Nichols with Pastor Mary Jean Simonin and Pastor Brown Naik, officiating. Memories and condolences may be shared by visiting her guest book at www.sutfinfuneralchapel.com Memorial contributions may be directed to Victory Junction Gang Camp, 4500 Adam’s Way, Randleman, NC 27317 in loving memory of Gaily Ann (Sawyer) Chase.

Gail Ann (Sawyer) Chase, 68, of Trinity, NC and formerly of Nichols, NY passed away on Saturday, April 14, 2018, at Kindred Hospital in Greensboro. Gail was born January 5, 1950, in Sayre, Pennsylvania, the daughter of the late Howard Earl... View Obituary & Service Information

The family of Gail A. Chase created this Life Tributes page to make it easy to share your memories.

Send flowers to the Chase family.