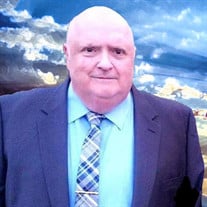 Rev. Garry Paul Jones, PhD., 65, of Greenwood, Indiana, went to live forever with his Lord Jesus Christ in heaven on Thursday, November 5, 2020. Garry was born on December 4, 1954, in Towanda, Pennsylvania. He was the second son of the late Paul Vincent and Marion Emma (Conklin) Jones – Short – Keifer. In February 1973, he trusted the Lord Jesus Christ as his personal Savior. The next day was Sunday, and the hymn “Heaven Came Down and Glory Filled My Soul” greeted him as he walked in the door of the church as a new believer. It became his favorite hymn. He was always ready to share about his Lord with anyone, anywhere, and at any time. Garry attended Bible school simply because he wanted to learn more about the Bible. During his first year, God called him to preach but because he felt unworthy he often argued with God telling God that he did not fit the qualifications to be a preacher. But try as he might shake the call, it was so strong in his life that he wholeheartedly surrendered to the ministry of preaching wherever God sent him. On June 28, 1975, he married his high school sweetheart Sandra Kay Bell. They were married right after high school and together they shared 45 faithful years of marriage. He deeply loved his wife and would often surprise her with gifts that “magically appeared” in their grocery cart at check-out. He made sure that she was well taken care of (some would even say spoiled.) Before moving to Indiana, he wanted their new home to be renovated exactly as mom wanted. In his words, “We have a weird and wonderful relationship, I’m weird and she’s wonderful.” He graduated from Ross Corners Christian Academy, Practical Bible Training School, and Patriot University in Colorado Springs, Colorado, where he received both his Master of Arts (1987) and Doctorate of Philosophy (1988.) He was ordained in the Gospel ministry in 1977 while serving at his first church. As a devoted and a dedicated servant of the Lord, Garry along with his wife Sandra, served the Lord in seven churches across the United States, including Hammonton, New Jersey; Bisbee, Arizona; Sebring Florida; Wapwallopen, Pennsylvania; and Troupsburg, New York. Garry’s love for young people and the elderly (and all ages in between) will always be remembered. He was not afraid of putting himself in danger to help others. In 1985, he was awarded the Outstanding Citizenship Award for assisting the State Police in “defusing a very serious situation.” The award read, “Without a doubt, your efforts brought a very serious situation to a peaceful end with no bloodshed and no loss of life. Your actions speak highly for your regard for human life as you risked your own life to help others.” Garry enjoyed spending time with his kids and grandkids, sharing thought-provoking comments, watching football (New York Giants), collecting sports memorabilia, walking his dog Beauty, grilling outdoors, and watching the fish in his aquarium. He will always be remembered for being a great storyteller. He loved his country and never missed voting in a single election since he was eligible to vote. In fact, one of his last patriotic privileges was to vote in the 2020 Presidential election, an opportunity which God provided to him even though he was in Covid-19 quarantine at the hospital. Garry’s memory will be treasured by his loving wife Sandra; his children and grandchildren: Annette (Jones) and Jonathan Dean Hanes and their sons Jonathan and Jamin and their daughter Lemao; Lora (Jones) and Jason Campbell; Paul and Tami Jones and their sons Paul Jr., and Benjamin; and Samuel and Jennifer Jones. He is also survived by his sister Mary Ann (Jones) Fuller. He was preceded in death by his parents and his brother Charles Vincent Jones and his two unborn grandchildren Naomi and Moses Campbell. Pastor Garry Jones will be laid to rest in the Darling Cemetery, Orwell Hill, Pennsylvania. A memorial service and celebration of his life will be held on November 20 at 2:00 pm at Greenwood Bible Baptist Church, of Greenwood, Indiana. Live stream can be viewed here: https://www.youtube.com/c/GreenwoodBibleBaptistChurch Memories and condolences may be shared by visiting his guest book at www.sutfinfuneralchapel.com “I have fought a good fight, I have finished my course, I have kept the faith: henceforth there is laid up for me a crown of righteousness, which the Lord, the righteous judge, shall give me at that day….” 2 Timothy 4:7-8 In lieu of flowers, the family is requesting gifts of remembrance be sent to Sandra Jones, 952 Erny Drive, Greenwood, IN 46142 or by visiting the paypal link at: Paypal

Rev. Garry Paul Jones, PhD., 65, of Greenwood, Indiana, went to live forever with his Lord Jesus Christ in heaven on Thursday, November 5, 2020. Garry was born on December 4, 1954, in Towanda, Pennsylvania. He was the second son of the late... View Obituary & Service Information

The family of Rev. Garry Paul Jones, PhD created this Life Tributes page to make it easy to share your memories.