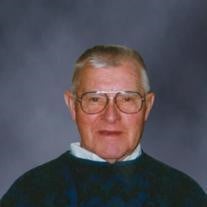 When tomorrow starts without me, try to understand, an angel came and called my name, then took me by the hand…..George S. Cheresnowsky, 92, of Nichols went home to be with his Lord and was reunited with his wife Marguerite on Saturday, October 13, 2012. George is survived by his daughter and son-in-law: Roselyn and Robert Lindhorst of Nichols; his grandchildren: Monica Babcock and Randy Lindhorst both of Waverly; great grandchildren: Dylan, Milena and Craig; sister and brother-in-law: Dorothy and Harry Paterson of Ridgebury, Pa; sister-in-law: Rebecca Newman of Owego; several nieces, nephews and their families also survive. George was predeceased by his wife, Marguerite; his infant daughter Paraska Louise Cheresnowsky; brothers: Michael, Peter, Nicholas, Andrew, Mathew, Leo, Theodore, Walter; sisters: Mary Shoemaker, Anna Geffert and Ginger Frantz. George was born on May 10, 1920 in Sayre, PA a son of the late Onufry and Paraska Cheresnowsky. He attended school in Sayre and at the age of 23, George joined four of his brothers and proudly served in the US Air Force during WWII. On September 6, 1945, George married Marguerite L. Bill and together they celebrated 55 years of marriage until her passing on July 2, 2000. Many will remember George, visiting area businesses as an automotive salesman for Bardahl Automotive Supplies for over forty years. George was a member of Blessed Trinity & St. Patrick Parish, Owego Elks Lodge, Boys & Girls Club (served as Administrator); Croton Hose #3 Fire Company; and was instrumental in Owego Little League, serving as District 7 NYS Administrator. His family will cherish his memory, as a loving father, grandfather and great grandfather. Silently we grieve and brush away the tears. The memories that you left behind will last throughout the years. Family and friends are invited to attend a period of visitation and time of sharing memories on Wednesday, October 17th from 5 to 7 pm at the Sutfin Funeral Chapel, 273 S. Main St., Nichols. Funeral services will follow at 7pm with his nephew, Pastor Alan S. Bill, officiating. Interment and prayers of committal will be held at the convenience of the family at St. Patrick Cemetery, Owego. Memories and condolences for George’s family may be shared by visiting our website at www.sutfinfuneralchapel.com Those who wish may kindly consider a memorial contribution to the Owego Little League, PO Box 2, Owego, NY 13827 in loving memory of George S. Cheresnowsky.

When tomorrow starts without me, try to understand, an angel came and called my name, then took me by the hand…..George S. Cheresnowsky, 92, of Nichols went home to be with his Lord and was reunited with his wife Marguerite on Saturday, October... View Obituary & Service Information

The family of George S. Cheresnowsky created this Life Tributes page to make it easy to share your memories.

When tomorrow starts without me, try to understand, an angel...

Send flowers to the Cheresnowsky family.