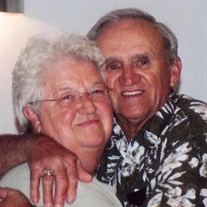 Novelist Hermann Hesse wrote, “It is not our purpose to become each other; it is to recognize each other, to learn to see the other and honor him for what he is.” George and Jean Corbin were, very simply, this quote personified. Together, their relationship was one of effortless simpatico, a glimmering balance of yin and yang, give and take, soft and hard, light and dark. They balanced each other out in a way that only 62 years of togetherness could. When each stood alone, however, their personalities were unstoppable in his and her own right. George, with his dry wit and wry sense of humor, could also be a real firecracker when given the right spark. Jean’s warm laugh, soft hugs, and her distinctive giggle and smile, almost always accompanied by a slap on her knee, gave her a glimmer that was uniquely hers. On Saturday, August 6, 2016, the glow of that relationship dimmed when Jean passed, but on Tuesday, April 30, 2019, the embers were rekindled when Dana left this world, and the two were joined again. George Dana Corbin was born November 5, 1933, in Elmira NY and raised in Potterville, PA, the son of George Grant Corbin and Irene Pendleton Corbin. Ada Jean Dutton was born November 21, 1935, in Windham Center, PA, the daughter of James William and Margaret Fairlie Dutton. They both grew up in and around Windham, Potterville, and Orwell. George, who was known by his family and friends “up north” as Dana, attended Rome High School, then proudly served his country in the United States Army while Jean graduated from LeRaysville High School. They were married on April 20, 1954, in the Potterville church, and together had four children, William Dana, Debra Jean, Mark Dewitt, and Sheila. George and Jean moved to Boca Raton, FL, in 1965 to raise their family and enjoy year-round sunshine.George was the man who could literally tear apart any car and put it back together again, blindfolded while he owned Corbin’s Auto Repair for many years in Pompano Beach. Recently if you asked him what he did he was the best truck driver on the East coast. Jean began her twenty-seven-year career with IBM in Endicott, NY, starting as a keypunch operator and moving up through the company, retiring as a Branch Office and Systems Manager in 1988. In 1992, the Corbins moved to their beloved second home on Lake Okeechobee, where Jean worked for a time for Walpole and George drove a truck for Goodbread Ranches. The two eventually decided to retire permanently, and George, a passionate fisherman, devoted many of his days in his boat on the lake. While George fished, Jean enjoyed spending her time in the kitchen, as she was a fabulous cook and baker, and she liked to poke around flea markets for a good find, and both happily spent time with local friends they had made over the years and the many visitors from up north who happened to drop by. Dana and Jean returned for a spell to Windham, spending summers up north with their vast and extended family, where they enjoyed going to local Saturday night racing and taking occasional weekends to attend NASCAR races, but eventually returned to Okeechobee permanently. As they took hands on April 30 and moved into the next part of their journey, Dana and Jean were warmly greeted by their son, Mark, their parents, Dana’s sister, Lila M. Bowen and his brother-in-law Richard W. Bowen and his wife Anna; Jean’s siblings, Janice L. Trimm and her husband Leonard, James W. Dutton, Jr., Thomas W. Dutton, Barbara A. Dutton, and Jean’s sister-in-law Carol Dutton. Those left here to celebrate the joy of having been part of their lives include their children, William, of Okeechobee, FL, Debra and her husband Timothy Douglas Galvin, of Mount Pleasant, SC, and Sheila and her husband Stephen Hineline Johnson, of Fort Myers, FL. Mimi and Bumpa will also very much be missed by their two grandsons, Douglas Grant Galvin of Mount Pleasant, SC, and Patrick Corbin Galvin and his fiancée Jessika-Laura Rodrigues, and their three great-grandchildren, Matthew Robert, Lukas Patrick, and Lilah Mae, all of Mount Pleasant, SC. Dana’s and Jean’s absence will also be felt by their siblings and brothers- and sisters-in-law, Gerald G. and Linda Corbin, of Sayre, PA, Christine and Ira Thetga, of Potterville, PA, Charles G. Dutton, Sr., Margaret Sharon and John E. Dalton, Cheryl D. and Patrick J. Ruddy, Beverly L. Morrill, John A and Chong Dutton, Larry Joseph and Joanne Dutton, and sisters-in-law Marie Dutton and Sandra Dutton. Countless nieces, nephews, and cousins from far and wide will also fondly remember the humor, kindness, laughter, and zest for life that Dana and Jean gave to them. Two charming individuals who chose to so delightfully entwine their lives with each other deserve to be beautifully remembered. Bill, Debbie, Sheila, and their families wish to invite all who knew and loved their parents to join them as they celebrate the lives of George Dana Corbin and Ada Jean Dutton Corbin, on Tuesday, May 28 at 11am at Sutfin Funeral Chapel, 273 South Main Street, Nichols, NY 13812. As George and Jean were exceptionally vibrant and lively people, the family requests that all who attend wear bright summer colors to honor the animated and rich lives they shared with all who were lucky enough to know them. Lunch will be served immediately following the service at the North Orwell Community Hall, Route 187, Rome, PA 18837. Following lunch, George Dana and Ada Jean will be laid to rest with their son Mark at Darling Cemetery on Orwell Hill in Orwell, PA. In lieu of flowers, the family requests that donations be made to Jean’s favorite charity, Girl Power 2 Cure, 1417 Sadler Road, #122, Fernandina Beach, FL 32034, in memory of George Dana and Ada Jean Corbin and in honor of Emma Dalton. Memories, photos and condolences may be shared by visiting their guestbook at www.sutfinfuneralchapel.com

Novelist Hermann Hesse wrote, &#8220;It is not our purpose to become each other; it is to recognize each other, to learn to see the other and honor him for what he is.&#8221; George and Jean Corbin were, very simply, this quote personified.... View Obituary & Service Information

The family of George Dana & Ada Jean Corbin created this Life Tributes page to make it easy to share your memories.

Novelist Hermann Hesse wrote, “It is not our purpose to become...

Send flowers to the Corbin family.