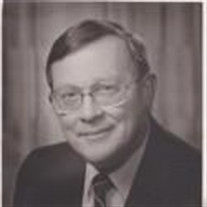 George G. Houser of Burlington, PA passed into eternity on 9 Sept 2015 after a summer's stay at the Skilled Nursing Unit at the Towanda Memorial Hospital, Towanda, PA. He was 78. George was born on March 31, 1937 in Johnson City, NY. He graduated from Cornwall High in Cornwall, NY. He obtained his BSEE degree from Brooklyn Polytechnical Institute, NYC and his masters in Electrical Engineering from Syracuse University in Syracuse, NY. He started working for International Business Machines (IBM) Federal Systems Division (FSD) in Owego, NY in 1959. George had a very successful career with IBM in the design and production of navigation, combat control and countermeasure systems installed on military aircraft and ships. He retired from IBM in 1987 having achieved the senior position of General Manager at the IBM Owego Plant and Vice President on IBM's senior executive staff. George continued his successful senior management career as President at Singer-Link Flight Simulation in Binghamton, NY (1987-1988), then President with Unisys Corp. in Long Island, NY (1988-1991) and finally as President with CAE-Link which became Hughes Training in Binghamton NY (1991 - 1997). Even in "retirement", he consulted part time for Lockheed Martin (who acquired Loral, who acquired IBM FSD) in Owego until 2013. George and Linda raised their three boys in Bradford County, PA around hiking and hunting on his land. It was on one of George's many bear hunting trips in Alaska that the Lord graciously reached down and saved him from an eternal hell he deserved as a member of the human race. God did not save him because he worked hard and paid his taxes. God did not save him because he was obedient with his tithes and generous with his gifts. God chose to save George simply out of His love and grace. For those of us who knew George, his life changed. A very special thanks to the staff at the Skilled Nursing Unit at Memorial Hospital in Towanda, PA. All the nurses and aids treated George like their own father. And they were so patient with his visiting family. Janet Greenfield was a godsend by demonstrating constant attention and care for which the family is extremely grateful. One day, a nurse was helping George shuffle down the hallway using his walker, he commented on how he missed walking in his woods. But today, George walks with renewed strength in God's presence according to Is 40:31, which reads, "But they that wait upon the Lord shall renew their strength; they shall mount up with wings as eagles; they shall run, and not be weary; and they shall walk, and not faint." George was preceded in death by his parents, Margaret Dunleavy Houser (1995) and (George) Gordon Houser (1997). He is survived by his wife of 57 years, Linda E. Houser who resides in Burlington, PA. He is survived by his three sons; George Gordy Houser and his wife Julie F. Houser (Merritt Island, FL), Jonathan Paul Houser and his wife Donalene Houser (Groton, CT) and Brian Timothy Houser and his wife Ruth Houser (Athens, PA). He is survived by his two younger brothers; Paul Houser and his wife Cynthia (Grand Island, NY) and Gary Houser and his wife Cheryl (Endicott, NY). He is survived by 8 grandchildren; Heidi Houser (Merritt Island, FL), Jill Houser (Denver, CO), Cindi (Fatu) Levi (Charlotte, NC), Suzy Houser (Merritt Island, FL), Matthew Houser (Bozeman, MT), Peter Houser (Longview, TX), Autumn Houser (Columbus, OH), Jack Houser (Athens, PA). Family and friends are invited to attend a period of visitation and time of sharing memories on Saturday, September 19th, 2015 from 10 – 12 pm at the Independent Baptist Church at 109 Cherry St., Towanda. A memorial service and a celebration of his life will follow at 12 pm at the church. Memories and condolences may be shared by visiting our website at www.sutfinfuneralchapel.com Those who wish may kindly consider a memorial contribution to the General Fund at the Independent Baptist Church at 109 Cherry St., Towanda. Caring assistance is being provided by the Cooley Family of the Sutfin Funeral Chapel, 273 S. Main St., Nichols.

George G. Houser of Burlington, PA passed into eternity on 9 Sept 2015 after a summer's stay at the Skilled Nursing Unit at the Towanda Memorial Hospital, Towanda, PA. He was 78. George was born on March 31, 1937 in Johnson City, NY. He graduated... View Obituary & Service Information

The family of George G. Houser created this Life Tributes page to make it easy to share your memories.

George G. Houser of Burlington, PA passed into eternity on 9...

Send flowers to the Houser family.