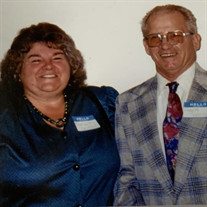 To Watch George's Service Live Stream Click Here George Robert Robinson age 86, of Nichols, passed away in the early morning hours on August 28,2021, after losing his long hard fought battle with cancer. George was born on October 19,1934, one of six children, born to the late Claude and Lida (Coyle) Robinson. He graduated from the Nichols School, Class of 1954. Besides his parents, he was predeceased by his faithful and loving wife of 56 years, Barbara (Root) Robinson, grandson Richard T. Robinson, great granddaughter Zoey S. Eberlin, two granddaughters, Nichole Robinson and Crystal Robinson VanDusen, brothers William Robinson, Frederick Robinson and brother-in-law Theodore O'Connor. George is survived by his and Barbara's six children; Tina and Michael Coyne, Tim Robinson (Deb), Dan Robinson, Deana and Michael Buffum, Thomas Robinson (Candy), and Denise Stocks (Tim), nineteen grandchildren and fifteen great grandchildren. He is also survived by his older children, Dana White, Greg White, Jim and Kathy (Robinson) Lum, Keith and Bobbi Robinson, Kevin Robinson and their families. His sister, Mary Robinson O'Connor, two brothers and their wives, Al and Bobbie Robinson and Earland Helen Robinson, sisters-in-law Kate Robinson (William) and Yvonne Robinson (Frederick) and many nieces, nephews, and cousins also survive, as well as his half siblings Chester, David, Joan, Carol Callahan and their families. George was a groundskeeper then window washer for over 40 years in Endicott, with the Local 200 Union, a subcontractor for IBM. ln the many hours he spent washing windows he worked with different types of apparatus such as tucker poles and suspended scaffolding, in addition to your basic bucket, sponge and squeegee. He spent many hours high above the ground along with only a couple of men, who were fellow window washers/friends, as finding people willing to do the extreme heights were few and far between. He also mopped and buffered floors, getting them to really shine, and delivered newspapers for a time. He enjoyed hunting and fishing and was always able to provide venison, rabbit, squirrel, or fish to keep his family fed. For a time, he had beef cows, first Angus then Herefords. Barbara was always by his side helping with the cleaning, cows, carl tractor maintenance, raising all of us, and keeping everything running smoothly. George loved being outdoors where he could mow the lawn, work in his garden, and plant his Dahlias each year. ln the last few weeks of his life, it was hard for him to realize he could no longer do what he loved. George had been attending the Windham Summit Bible Church where he made many friends. A period of visitation will be held on Thursday, September 2nd from 1 to 2 pm at the Sutfin Funeral Chapel, 273 S. Main St., Nichols. A Funeral Service for George will follow at 2pm, with Pastor Ken Crain officiating. Memories and condolences may be shared by visiting his guestbook at www.sutfinfuneralchapel.com ln lieu of flowers, please consider a donation to the Nichols Fire Department, PO Box 336, Nichols, NY 13812 in remembrance of George.

The family of George R. Robinson created this Life Tributes page to make it easy to share your memories.

Send flowers to the Robinson family.