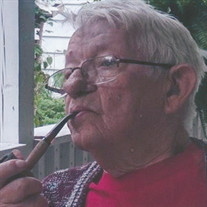 Softly in the morning, you heard a gentle call, you took the hand God offered you and quietly left us all……Glen G. Ellis, 85 of Windham Summit, PA., passed away peacefully at his home, on Aug. 10th, 2016. Glen was born on April 30, 1931, in Johnson City, NY a son of the late Glen G. and Edna (Moore) Ellis. When Glen was two years old, his parents moved their family to Windham Summit, where they operated a dairy farm. Glen was a graduate of the Nichols High School and following graduation in 1950 he, enlisted in the U.S. Navy. He served aboard the USS Kankakee TAO-39 during the Korean Conflict off the coast of Korea, performing refueling operations. In 1954, he was honorably discharged and returned to the family farm to continue farming. On May 10, 1958 in Johnson City, he married Florence Frost at St. Paul’s Lutheran Church in Johnson City and together they raised three children. In 1965, he ended his farming career and went to work for Ingersoll Rand in Athens, PA, retiring in 1994. Glen was a member of the American Legion and VFW Post 6824 in LeRaysville, PA. Glen and his wife Florence were long time member of the Nichols United Methodist Church. Glen will be greatly missed by his loving wife of 58 years, Florence Ellis, a sister Dawn Larson of Rutledge, TN; a daughter and son-in-law: Victoria (Ron) Moore of Mercur Hill, PA; his sons and daughters-in-law: Edward (Lauri) Ellis of Enosburg Falls, VT; and William (Melissa) Ellis of Windham Summit, PA; six grandchildren: Jesse (Casey) Ransom of Montrose, PA; Becky (John) Kolesar of Orwelll Hill, PA; Lenny Kobbe of Overton, PA; Lindsey (Bryan) Rought of Potterville, PA; Joshua and Benjamin Ellis of Windham Summit. He leaves four great grandchildren: Myla Ransom, Christopher Rought, Madeline Kobbe, and Brook Kolesar. Glen was predeceased by his father, Glen G. Ellis, Sr.in 1979, his mother, Edna Ellis in 1983, his older sister, Shirley (Paul) Williams in 2005 and a brother-in-law Bill Larson. Family and friends are invited to attend a period of visitation on Sunday, August 14th from 2 to 5 pm at the Sutfin Funeral Chapel, 273 S. Main St., Nichols. A period of visitation will also be held on Monday, from 10 to 11 am. A funeral service and a celebration of Glen’s life will be held at 11 am at the funeral chapel with Rev. Richard Davis, officiating. Interment and prayers of committal will follow in the Osborne Hill Cemetery, Windham Summit. Memories and condolences may be shared by visiting his guest book at our website www.sutfinfuneralchapel.com Those who wish may kindly consider a memorial contribution to the VFW 6824 Hardship Fund, 1468 Haighs Pond Road, Rome, PA. 18837

The family of Glen G. Ellis created this Life Tributes page to make it easy to share your memories.

Send flowers to the Ellis family.