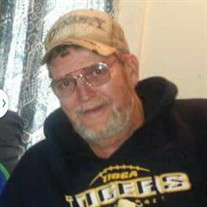 Glenn William “Bill” Thetga, 64, passed away January 26, 2017, after a brief illness. His wife of eighteen years, Trish, and children Angel Jenner, Melissa Pelton, Kate (Kyle) Coe, and Mike Melella will miss their big-hearted ‘gentle giant.’ Bill was born and raised in Windham, Pennsylvania, growing up on the family dairy farm. His father Glenn passed away in 1985, and his mother, Betty, in 2007. Step-father Daryl Parks passed away in 2016. Bill’s siblings are Dale Thetga (deceased), Ray (Joanne) Thetga, and Carol Hosmer. Among the stories Bill would tell about his childhood are about when he would go coon hunting on Osborn Mountain, stopping at Ma Leonard’s for a warm breakfast and hot cocoa. Graduating from Northeast Bradford High School, Bill’s career included driving truck for several companies, especially Agway for whom he worked for over twenty years. Bill had a tough, rugged exterior, but he had the kindest of hearts. He loved doing hayrides for kids, and enjoyed teaching young people hunting. An avid outdoorsman, Bill enjoyed fishing, hunting (how he enjoyed feeding his deer!), as was following NASCAR, and watching high school football. A great supporter of the Tioga Tigers football team, one of Bill’s greatest joys was watching the Tigers win! Bill, who also went by “Big Foot” and “Bibs,” loved to kid, but it was always an expression of the big heart he had for his family and many loyal friends. He was surrounded by and touched by his many friends who meant the world to him. He was a member of the Skiff-Bower VFW in Sayre, PA. But not all of Bill’s friends were human! Through the years he had many pets, but it was a lab named Coco that really stole his heart! Bill’s grandchildren are Bryan, Snowy, Devin, Madisyn, Dolan, Kolbe, and Kolten (deceased). In addition, he had several nieces and nephews, and a longtime friend who is considered ‘family,’ Nancy Brown. Friends may share their memories of Bill and sympathy with the family on Saturday, February 4th, from 2:00 to 4:00, at Sutfin Funeral Chapel, 273 South Main Street, in Nichols. The family is providing flowers and you are invited to make a donation to the Tioga Varsity Football Program c/o Mr. Nick Aiello, at Tioga Central School, PO Box 241, Tioga Center, NY 13845.

The family of Glenn "Bill" William Thetga created this Life Tributes page to make it easy to share your memories.

Send flowers to the Thetga family.