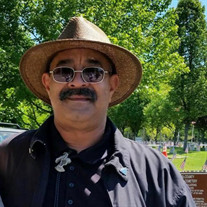 Softly in the morning, you heard a gentle call, you took the hand God offered you and quietly left us all... Our hearts were broken on Monday morning, April 26, 2021 with the passing of Gregory Charles VanDunk, 71, of (Orwell Township) Wyalusing, Pa. Greg was born on May 8, 1949 in Suffern, New York a son of the late Arthur Theodore and Edvenia (Caldwell) VanDunk. He was a graduate of Warwick Valley Central School class of 1968. In 1969, Greg enlisted into the US Army and served his country during the Vietnam era. On January 14, 1972, he received an honorable discharge from the Army and was awarded a Bronze Service Star, a National Defense Service Medal and had a keen eye as a sharpshooter. Greg’s keen eye also was an asset as he played softball for many area teams in the Middletown area. When not playing softball, Greg and his sister Georgette were known to be the “king and queen” of Foosball and were a challenge to many. Greg was a proud veteran and was honored to be a part of the Honor Guard at Fort Jackson. Upon his discharge, Greg was employed as a heavy equipment specialist and assisted his father during the original construction of the Tappan Zee Bridge. Looking to explore what Bradford County had to offer, Greg decided to make country living his home. Greg was a true bird whisper and could often feed a hummingbird from the palm of his hand. On April 14, 2012 with a with a twinkle in his eye and love in his heart, Greg was married to his best friend Cindy at the South Warren Church. Greg was a member of the Hancock Fire Department and the South Warren Church. A true “tinkerer” Greg loved to spend time fixing his mini coopers. Greg with a tune in his heart, could sing along to any song and made Cindy smile. His daughter Sammy, says that she received her musical talents from her dad and is so thankful for that. Outings touring the countryside would often find Greg and Cindy stumbling across a flea market or a garage sale. The nights were complete, when Greg would see that the treasures found at a sale was also shown on the Antique Roadshow. Memories were also made with outings to see the newest Marvel and Kung Fu movies. Greg will be so greatly missed by his wife Cindy; his children: Jessica Beach (Ranata); Samantha VanDunk; Lauren VanDunk (Tony); Meagan VanDunk (Jose); Cory (Stacey) Russell; Aaron Russell; Sabrina Einsla (Courtney). His grandchildren: Marissa, Miles, Seth, Brooklyn, Alberto, Anthony, Christopher (Zoe), Marcus, Keisha, Jerel, Stormy, McKenzie, Kiah, Devon, Elizabeth, Sawyer and Mark; his great grandchildren: Stephan, Marcel, Averie, Leighah, Sofia, Chance, Kion, and Ireland. His sisters: Georgette VanDunk (Robin Haribold); Janelle VanDunk (Joanne Leavitt). His mother-in-law Marjorie Rice; his sisters-in-law and brothers-in-law: Marie Chubbuck, John (Linda) Rice, Marlene (Bob) Hammerly, Marian (Bill) Cherry, Rebecca Wood, Theresa Field, Christine (BJ) Jones, Michael Rice, Lee (Sonya) Rice; sisters-in-law: Mona VanDunk and Donna VanDunk. Several nieces, nephews among them Tara (William) Lewis and Carl (Stephanie) VanDunk and their son Henry and his aunt Eileen Caldwall. Greg was welcomed into heaven by his parents; his infant son Gregory Theodore VanDunk; an infant daughter Meredith VanDunk; son Aaron VanDunk; brothers Theodore and Carl VanDunk; his father-in-law Leland Rice; brothers-in-law: Stanley Rice, Lloyd Rice, Wendell “Dutch” Noble, Jeff Fields, Michael Wood and Lynn Chubbuck; and a nephew Scott Moore. Greg will be laid to rest on July 16th at 11am at the Orange County Veterans Cemetery, Gohen, NY where military honors will be accorded. Memories and condolences may be shared by visiting his guestbook at www.sutfinfuneralchapel.com Those who wish may kindly consider a memorial contribution to the DAV - Disabled American Veterans, PO Box 14301, Cincinnati, Ohio 45250-0301 in loving memory of Gregory Charles VanDunk.

Softly in the morning, you heard a gentle call, you took the hand God offered you and quietly left us all... Our hearts were broken on Monday morning, April 26, 2021 with the passing of Gregory Charles VanDunk, 71, of (Orwell Township) Wyalusing,... View Obituary & Service Information

The family of Gregory Charles VanDunk created this Life Tributes page to make it easy to share your memories.

Send flowers to the VanDunk family.