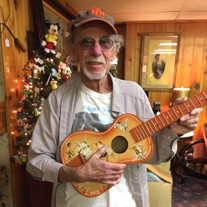 Date of birth: August 16, 1942 ~ Place of birth: Rome, PA Guy Walter Abell, raconteur, lifelong learner and educator, and long-suffering NY Mets and Giants fan, died in a tragic house fire the morning of February 14, 2022. He would have turned 80 this coming August. Guy was the third person in his family to carry the first name of Guy. He was the only child of Ruth Frances Gillette and Guy Forbes Abell, born in Rome PA while his father was serving in Australia as an Army veterinarian during WWII. His aunts Helen and Myra helped his mother take care of him in his early childhood. He spent his formative years traveling with his parents as his father worked as an Army vet stationed in Texas, Louisiana, and Wisconsin. He briefly attended the University of Wisconsin but ended up taking summer classes at SUNY Oswego, where he met his future wife, Martha Anne Babcock and lifelong friend, Francis Quirk. After earning his teaching degree, he and Marti moved to Fulton NY, where he taught at G. Ray Bodley High School and made many dear friends. He taught world history and economics until his retirement in 1997. He convinced many students that he had a cat of superior intelligence, that he kept a dragon in his basement (something student babysitters would ask his daughters about in an uneasy way) and told the same jokes to a couple generations of students. He was a proud Union member and played softball with the Bodley Bombers, a summer league for teachers over 30. After retiring, he and Marti and their pets moved to the house Guy and his father built as his parent’s retirement home during the early 1970’s in the town where he was born. What they thought would be a temporary stay until they moved somewhere without snow turned into their permanent home. Guy threw himself into retirement with great enthusiasm, becoming a Master Gardener, volunteering at the Bradford County Historical Society, and writing a weekly newspaper column about he and Marti’s travels in their 1990 Mazda Miata, a gift he bought himself as a reward for putting two daughters through college. He served as a trustee at the P.P. Bliss Gospel Songwriters museum, and was bemused to find himself elected to the Rome Council on the basis of three write-in votes. He and Marti served on the Rome Neighborhood Watch and formed a stock investment club. Guy loved animals, especially cats and cocker spaniels. He took great delight in the deer and birds that visited his Rome backyard. He subscribed to - and read - many magazines and newspapers and was a frequent library patron. In 1979 he mentioned liking hippopotamuses which got his family and friends giving him hippo figurines for every single occasion going forward. It is safe to say that he had the largest collection of hippos in the state of Pennsylvania. He loved cars, and at the time of his death had four, including a 1967 Ford Mustang and a 1990 Mazda Miata red convertible. He enjoyed traveling, meeting new people, and being a father and grandfather. It’s possible he was the only Biden supporter in Bradford County. His beloved wife Marti died in 2018. Guy was very close to his local friends, Joe and Josie Clutter and Claire Bortis, and his daughters are grateful for those who kept an eye on him during these three plus years. Guy is mourned by his daughters, Susan E. Abell of Hinesburg, VT, Karin M. Abell of Carrboro, NC, his favorite sons-in-law, Mitchell Barron and Adam Constabaris, and his beloved grandsons, Max Abell Barron and Emmett Zaphod Constabaris. He is also survived by his sister-in-law, Susan Eichner of Bellevue, Washington and five nieces and nephews. He was related to many Abells in Bradford County and could trace his ancestors back to a relative who traveled from France to Britain with William the Conqueror. His dear companion, Luther the Wonder cat, also perished in the fire. An event to celebrate Guy’s life will occur at a later date. In his memory, please fill a birdfeeder, go to your local library, adopt a furry friend, plant some perennials, or root for an underdog. Memories and condolences may be shared by visiting his guestbook at www.sutfinfuneralchapel.com Donations in his memory can be made to the Bradford County Library or to a library in your community.

The family of Guy W. Abell created this Life Tributes page to make it easy to share your memories.

Send flowers to the Abell family.