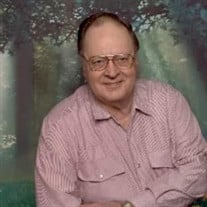 Harold David Jackson David Jackson, 85, of Endicott, N.Y. was welcomed into the arms of His Lord and Savior Saturday, April 24, 2021. He was born in Dunmore, PA on May 16, 1935, the only child of the late Harold Jackson and Eva Tarbox Jackson. He is survived by his four children, Cliff Jackson (Karen), Asheboro, North Carolina, Brett Jackson, Anderson, South Carolina, Lori Santo, Warren Center, PA, Stacy Jackson (Mark Shanks), Cleveland, Ohio. Also surviving are ten grandchildren and five great-grandchildren, and a dear companion Sharon Brown. David loved scouting and had the honor of earning an Eagle Scout award. David graduated from Dunmore High School as an honor student. He then proudly served in the Army. After finishing his service, David went to his beloved Penn State University where he earned a perfect GPA as a math major and was valedictorian of his graduating class. IBM came calling after he finished college, where David had a long and distinguished career. He was a brilliant engineer and analyst. At the Glendale Lab, David received numerous accolades for his work. The one he was most proud of was being recognized for his substantial work on the new computer that flew the Apollo 11 mission to the moon. After thirty-three years, David retired from IBM in 1984. David loved the Lord. His faith compelled him to be a man of God. He raised his family as such and spent much of his free time serving in his church through a variety of ministries: teaching Sunday School, preaching, studying Biblical prophecy, leading the Christian Stockade boy’s group, and performing chalk talks. He shared the gospel respectfully but with conviction everywhere he went with whomever would listen. David’s commitment and faith greatly impacted his church and his community. David had many interests and passions. He loved photography and won several local awards for his creative shots. He loved model trains, airplanes, and boats. He could build them with metal, wood or paper. Often, he would create the tools to make these models. He eventually published a book about scratch building model planes and had numerous articles he wrote published to share his modeling ideas. David’s biggest passion was studying Civil War history. He continually walked numerous battlefield sites, recording his perspective on video tapes. He studied each battle and analyzed the decisions leaders of both the North and South made. As a true patriot, David wanted his family to understand the incredible sacrifice it took to keep the United States united. He loved watching re-enactments. He spent hours painting Civil War miniatures which he used to re-create his own miniature re-enactments. After retiring, David’s passion became his grandchildren and great-grandchildren. He shared many of his interests with them. School sports, school plays, fishing and swimming trips, carving things into an old apple tree, sharing stories, sharing his love for the Lord, and just being there for whatever their needs were. He will be greatly missed and greatly celebrated. A memorial service celebrating his life will be held later this year. David requested that in lieu of flowers, donations can be sent to the Benevolence Fund - Windham Center Community Church, 35 Church Lane, Rome, PA 18837. Memories and condolences may be shared by visiting his guestbook at www.sutfinfuneralchapel.com

Harold David Jackson David Jackson, 85, of Endicott, N.Y. was welcomed into the arms of His Lord and Savior Saturday, April 24, 2021. He was born in Dunmore, PA on May 16, 1935, the only child of the late Harold Jackson and Eva Tarbox Jackson.... View Obituary & Service Information

The family of H. David Jackson created this Life Tributes page to make it easy to share your memories.

Send flowers to the Jackson family.