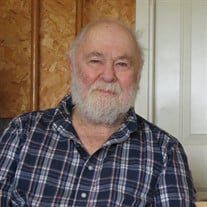 Until we meet again, we know one thing for sure; you will be there greeting us as we cross through Heaven’s door……Harold W. Ball, 84, of Nichols, went home to be with the Lord on March 27, 2019. He was born on June 27, 1934 at home on Osborne Hill in Rome, PA a son of the late Katherine (White) and Clarence Ball. Harold attended school in Nichols and was a graduate of Nichols High School in 1953. On August 21, 1954 he married Dorothy Kelsall and together they shared 38 years of marriage until her passing on February 17, 1992. A lifelong dairy farmer, Harold owned and operated the Ball Farm in Nichols with his brother Emory. He enjoyed reading, especially the Wall Street Journal and traveling the countryside. Harold and Dorothy were founding members of the Gospel Mission Church, which later became the Nichols Baptist Church. He will be greatly missed by his son: Steven Ball of Owego, NY; his daughter and son-in-law: RuthAnn and Melvin Race of Nichols, NY; his brothers: Emory Ball of Nichols, and Ralph (Sandra) Ball of Lawrenceville, GA; his nieces and nephews: Robert Ball, Rebecca Ball, Lois (Malin) Martin, Martha Struble, Tim (Theresa) Ball, Mary Ball, Benjamin Ball, Sharon (Walter) Ballard, Cheryl (Jerome) Brittingham, Scott (Georgia) Ball; Mel’s mother Barbara Race; many great nieces and nephews among them a special great niece and caregiver Amanda Struble. Harold was predeceased by his parents Katherine and Clarence Ball; his wife, Dorothy; his sister-in-law Judith Ball and his nephew Terry Struble. Family and friends are invited to a funeral service and celebration of Harold’s life on Sunday, March 31st at 2 pm at the Sutfin Funeral Chapel, 273 S. Main St., Nichols with Pastor Steve Canfield officiating. Interment and prayers of committal will be held at the convenience of the family on Monday in the Valley Home Cemetery. Memories and condolences may be shared by visiting his guest book at www.sutfinfuneralchapel.com Those who wish may kindly consider a memorial contribution to the North Rome Christian School, 3376 N. Rome Road, Rome, PA 18837

The family of Harold W. Ball created this Life Tributes page to make it easy to share your memories.

Until we meet again, we know one thing for sure; you will be...

Send flowers to the Ball family.