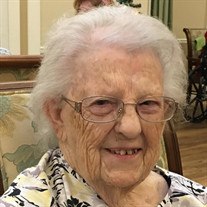 A mother holds her children’s hand for a little while and their hearts forever….Our loving mom, grandma, sister, aunt and friend Harriet Vought Twigg, 93, formerly of Talmadge Hill Road, Waverly, passed away on Tuesday evening, June 26, 2018 in Lakeland, Florida. “Hattie” as she was affectionately known as by her family and friends was born on October 29, 1924 in Rome, Pennsylvania a daughter of the late Isaac Alva and Mary (Williams) Vought. She was a graduate of Rome High School and continued her education oat Elmira Business Institute. Hattie retired from the Guthrie Clinic Business office following thirty-five years of serving as the office manager. On February 1, 1947 she married Paul E. Twigg, Jr. and together they shared nearly sixty-seven years of marriage until his passing on January 23, 2014. Harriet was a member of the Barton United Methodist Church, Oak Leaf Grange #1412 at Smithboro. In addition, she also was a member of the Order of Eastern Stars Chapter 9. Harriet enjoyed bowling, crafts, camping, reading and spending time with her family. Those left to cherish Harriet’s memory are her children: Paula Hamilton of Florida; Karen (John) Hooper of Lakeland, Fla; David (Dottie) Twigg of Chapin, SC; Roger (Jeri) Twigg of Huntersville, NC; sisters-in-law: Barbara Fairlie of Barton; Norma Barrowcliff of Sayre; eleven grandchildren, 18 great grandchildren; and 7 great great grandchildren; numerous nieces, nephews and their families also survive. Harriet was predeceased by her parents Isaac Alva and Mary Vought; her husband Paul E. Twigg, Jr; her sisters Marion Vought, Irene Cleveland and Dorothy “Helen” Manchester. Family and friends are invited to attend a period of visitation on Monday, July 2, 2018 from 4 to 7 pm at the Sutfin Funeral Chapel, 273 S. Main St., Nichols. A funeral service and celebration of Harriet’s life will be held on Tuesday, July 3rd at 10 am at the Sutfin Funeral Chapel with her pastor, Rev. Alan Bill, officiating. Interment and prayers of committal will follow in the Nichols Cemetery. Memories and condolences may be shared by visiting her guest book at www.sutfinfuneralchapel.com Those who wish may kindly consider a memorial contribution to the Barton United Methodist Church, PO Box 511, Barton, NY 13734 in loving memory of Harriet Vought Twigg.

The family of Harriet V. Twigg created this Life Tributes page to make it easy to share your memories.

A mother holds her children’s hand for a little while and their...

Send flowers to the Twigg family.