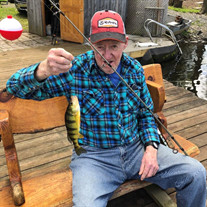 Harrison “Red” Johnson, 83, of Orwell Twp., Rome, Pa was reunited with his loving wife Dorothy Faye Johnson on Monday morning, July 26, 2021 following a brief period of declining health. “Red” as he was affectionately known by his family and friends was born on June 24, 1938 in Windham Summit, Pa a son of the late Floyd D. and Doris E. (Whittaker) Johnson. Red was a 1956 graduate of Northeast Bradford High School. During his school years, he was a star basketball player and received the nickname “Ace” by his classmates. Following graduation, Red started working for the Vestal Lumber Yard. His employment there was brief as he took a position at IBM, he retired as a manager following 35 years of service. On May 10, 1958 he married Dorothy Faye Coleman and together they shared sixty-one years of marriage until his heart was broken with her passing on October 27, 2019. Dedicated to serving their communities, Red and Dot were members of the West Warren Congregational Church where they served many Turkey Suppers and were true Christians. In addition, Red also served as past Chief and President for the Warren Township Fire Department and for many years served as Chairman for their annual Field Days. Always willing to serve others, Red was a member of the Rome-LeRay Masonic Lodge #471 and Order of Eastern Stars 498. During his membership with Lodge and Eastern Stars he served as Worthy Patron and Worshipful Master. Red and Dot enjoyed a living a country living way of life and loved to be surrounded by his family. Peaceful solitude was often found fishing and hunting. Over the years, Red and Dot loved the serene time away on many cruises and we were blessed to all be able to travel as a family to Bermuda. While our parents loving spirts will always remain in our hearts, we are at peace knowing that they are forever together now. The many memories our hearts hold will forever be cherished. Red and Dot will be greatly missed by their children: Kevin and Amanda Johnson; Sheila Johnson and Junior Yates; their special grandchildren: Cameron (Angela) Martin, Calla (Ben) Brink, Madison Johnson, Cassie Johnson and Carter Johnson; his great grandchildren: Ava and Owen Martin; Brooklynn, Isaiah, and Kinley Rae Brink; Red’s sister and brother-in-law: Carol and Charles Reed; Red’s brother Clyde Johnson. Dot’s brother Brian Coleman; a sister-in-law: Pat Coleman; many nieces, nephews and their families also survive. Red and Dot were predeceased by their parents Floyd D. and Doris Johnson; Fay Arthur and Olive Coleman; a baby boy; Dot’s brothers Howard Coleman and Dean Coleman; sisters-in-law Claudia Coleman and Maryann Johnson. Family and friends are invited to attend Masonic and Order of Eastern Star Services to be held on Friday, July 30th at 2 pm at the Sutfin Funeral Chapel, 273 S. Main St., Nichols. A period of visitation and time of sharing memories will follow from 3 to 7 pm. A memorial service celebrating Red and Dot’s life will be held on Saturday, July 31st at 10 am at the West Warren Congregational Church. They will be laid to rest at the Warren Center Cemetery where military honors will be accorded. Memories and condolences may be shared by visiting Red’s guestbook at www.sutfinfuneralchapel.com Those who wish may kindly consider a memorial contribution to the West Warren Congregational Church, c/o Judy Davenport, 3645 N. Rome Road, Ulster, PA 18850; The Warren Twp. Vol. Fire Dept., PO Box 24, Rome, PA 18837 or Tracy’s Hope, PO Box 504, Apalachin, NY 13732 in loving memory of Red and Dot Johnson.

The family of Harrison "Red" D. Johnson created this Life Tributes page to make it easy to share your memories.

Send flowers to the Johnson family.