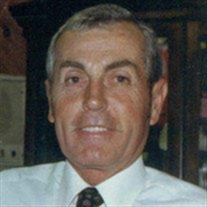 Howard "Howdy" Jones, 89, entered into eternal rest on March 23, 2020, surrounded by his wife and family. He was born on September 3, 1930, in Endicott, New York, and was raised on a farm in Warren Center, Pennsylvania. He was predeceased by parents Morgan and Helen, brothers Douglas and Morgan Jr., and sisters Roena and Mary Lou. He and his wife, Bettie Mai, raised their family in Warren Center and Apalachin, New York. He was a veteran of the United States Army (Ft. Campbell) where he met Bettie. He owned and operated Howdy Jones Excavating, Jones and Mead Construction, Howdy Jones Construction, and Howdy Jones Used Equipment. Howdy was a member of the Warren Center United Methodist Church, Westbrook Masonic Lodge #333, the International Flying Farmers, and various antique car clubs. While he had an affinity for all things fast—flying his airplanes and helicopters, racing stock cars, and riding his snowmobiles and motorcycles—he was happiest when visiting with family and friends. Howdy loved his family dearly and left them with a love of accomplishment and self-worth. He is survived by his wife, Bettie, of 63 years; children, Paula Druen (Dan), Howdy Jones, Jr. (Tara), Nancy Rabenold (Gary), and Tracy Greenwood (Mark); grandchildren, Angela Vitale Kidd (David), Michele Vitale House (Joseph), Ben Vitale (Bobbi Jayne), Ellory, Audra, Raquel “Boo Boo,” and Howdy III Jones, Gary Jr. and Evan Rabenold, and Ryan Salts (Katie); great-grandchildren, Zachary, Landon, Jacob, William, Adeline, Maverick, Jett, Jaxon, and Jostyn; and brother-in-law, sisters-in-law, nieces, nephews, family, and friends. Howdy’s humor and love of living will be missed. Visitation will be held on Friday, September 25th from 3 to 7 p.m. at the Hope Community Church, 5864 Jackson Valley Rd., Warren Center, PA. The memorial service will be held on Saturday, September 26th, at the Hope Community Church, with visitation from 10 to 11 a.m. and the funeral to follow. Memories and condolences may be shared by visiting his guestbook at www.sutfinfuneralchapel.com In lieu of flowers, contributions can be made to the Warren Township Volunteer Fire Department, Po Box 24, Rome, PA 18837 in loving memory of Howard "Howdy" Jones. Caring assistance is being provided by the Cooley Family of the Sutfin Funeral Chapel, 273 S. Main St., Nichols.

Howard "Howdy" Jones, 89, entered into eternal rest on March 23, 2020, surrounded by his wife and family. He was born on September 3, 1930, in Endicott, New York, and was raised on a farm in Warren Center, Pennsylvania. He was predeceased by... View Obituary & Service Information

The family of Howard "Howdy" Benjamin Jones, Sr. created this Life Tributes page to make it easy to share your memories.

Send flowers to the Jones, family.