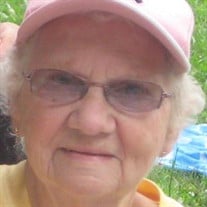 A life well lived is a precious gift, of hope and strength and grace, From someone who has made our world a brighter, better place It’s filled with moments, sweet and sad. With smiles and sometimes tears, with friendships formed and good times shared and laughter through the years. A life well lived is a legacy of joy and pride and pleasure, a living, lasting memory our grateful hearts will treasure…. Irene M. Keenan, 94, of Nichols passed away peacefully on Friday, January 3, 2020 at the Sayre Health Care Center. Irene was born on July 31, 1925 in Owego, New York the daughter of the late Harry and Cynthia (Brainard) Morse. She was a graduate of Owego Free Academy class of 1943. On September 11, 1945 she married Harry Shultz and together they shared 25 years of marriage until his passing in 1970. She was also predeceased by her second husband Francis X. Keenan in 1975. Irene was a loving wife, mom, grandma and great grandma. She was a twenty-five year employee of IBM Owego where she served as a Senior Administrative Specialist. Irene was a 50+ year member of the Nichols United Methodist Church and a member of the United Methodist Women. She enjoyed reading, cooking, baking pies and cookies, peanut brittle and was one of the NY Yankee’s biggest fans! Irene will be greatly missed by her children: Cynthia (Cindy) Shirkey of Naples, Fla; Cathy (Tom) Hawley of St. Petersburg, Fla; Karen (David) Lucas of Trumansburg, NY; Terry (Shanon) Shultz of W. Oneonta, NY. Her grandchildren: William Shirkey, Lora (Dan) Wiggins, Norman Bennett, Torey (Matt) Compton, Trent Lucas, Karsen Shultz, Leeza Shultz and Matthew Shultz. Her great grandchildren: Cody Bennett, Clay Wiggins, Carter Compton and Olivia Compton. Several nieces, nephews and cousins, and among them a special cousin-in-law: Joanne Morse. Irene was predeceased by her son-in-law David Shirkey; her siblings: Clifford Morse, Grace Cole, Edna Jones, Harry (Buster) Morse Jr, Henry Morse, Donald Morse, and Anna Tiley; and a cousin Teddy Morse. Family and friends are invited to attend a period of visitation on Saturday, January 18th from 10 to 12 pm at the Sutfin Funeral Chapel, 273 S. Main St., Nichols. A memorial service will follow at 12 pm. Interment will be held at the convenience of the family in the Tioga Cemetery. Memories and condolences may be shared by visiting her guest book at www.sutfinfuneralchapel.com Those who wish may kindly consider a memorial contribution the Nichols United Methodist Church Memorial Fund, 59-1 Main Street, Nichols, NY 13812 in loving memory of Irene M. Keenan.

A life well lived is a precious gift, of hope and strength and grace, From someone who has made our world a brighter, better place It&#8217;s filled with moments, sweet and sad. With smiles and sometimes tears, with friendships formed and... View Obituary & Service Information

The family of Irene M. Keenan created this Life Tributes page to make it easy to share your memories.

Send flowers to the Keenan family.