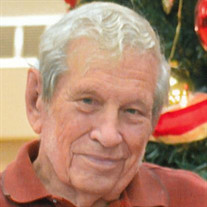 Irwin W. Chrispell, 92, of West Warren, PA passed away on Wednesday, August 8, 2018 at his home with his loving wife and family by his side. Irwin was born on December 19, 1925 in Nichols a son of the late William and Hazel (Radeker) Chrispell. He attended school in Orwell and Nichols. On October 18, 1947 he married Lucille Mae Barton. Irwin worked as a printer most of his life and owned and operated the Village Press. In addition, he shared his knowledge of printing with students at the Towanda Vo-Tech. Irwin was a lifelong member and served as a Elder of the Seventh-day Adventist Church of Sayre. He also did an apprenticeship in Carpentry. Irwin had many hobbies, he enjoyed gas engine, collecting stamps, guns, Indian relics, minerals, toys and spending time with his family and their antique cars. His lifelong dreams were having a museum of his many collections, participating in another mission trip and having all his family and friends come to know the Lord. He will be greatly missed by his wife of nearly 71 years, Lucille at home; his three sons: Daniel (fiancé Betty) Timothy (Janine) and Micah (fiancé Patty) all of West Warren, Pa; and his daughter Rebekah (Jim) Crown of West Warren; a son-in-law Dick Ross of Orwell; nephew Carl and Nancy Smith of Potterville, several nieces, nephews and their families also survive. Eleven Grandchildren, twenty great grandchildren. He was predeceased by his daughter Deborah Ross. Abiding with his wishes, a private family interment will be held in the Jillson Cemetery. Memories and condolences may be shared by visiting his guest book at www.sutfinfuneralchapel.com Those who wish may kindly consider a memorial contribution to the Laurel Lake Camp c/o Seventh-day Adventist Church, 4981 Wilawana Rd, Sayre, PA 18840 or Guthrie Hospice, 421 Tomahawk Rd, Towanda, PA 18848 in loving memory of Irwin W. Chrispell.

Irwin W. Chrispell, 92, of West Warren, PA passed away on Wednesday, August 8, 2018 at his home with his loving wife and family by his side. Irwin was born on December 19, 1925 in Nichols a son of the late William and Hazel (Radeker) Chrispell.... View Obituary & Service Information

The family of Irwin W. Chrispell created this Life Tributes page to make it easy to share your memories.

Send flowers to the Chrispell family.