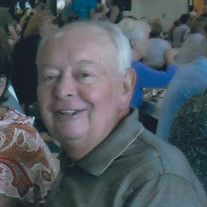 Softly in the morning you heard a gentle call, you took the hand God offered you and quietly left us all……James L. Clink, 76, of Warren Center, Pa passed away unexpectedly on Thursday morning, October 15, 2015. Jim was born on May 8, 1939 in Sayre, PA a son of the late Howard and Anna (Kroll) Clink. He was a 1957 graduate of the Northeast Bradford High School and the Williamsport Technical School where he studied Aircraft and Engine Mechanics. Jim was a longtime Inspector for US Airways and retired in 1992 following 32 years of service. On April 18, 1959, he married Naomi Myers and together they shared 57 years of marriage. Jim was a member of the Community Independent Bible Church in Little Meadows; a long time member of the Masonic Lodge No. 471 F. & A.M., LeRaysville, and the NRA. He enjoyed spending time outdoors, hunting, fishing and was always willing to lend a helping hand to anyone in need. Jim was a devoted Christian who shared his love for the Lord by traveling on mission trips and for many years directed the Murphy’s Mission Camp in Murphy, California. Jim will be greatly missed by his wife Naomi; his son and daughter-in-law: Ricky and Joanie Clink of Fayetteville, GA; James H. Clink of Warren Center, Pa; Jeffrey K. Clink of Salisbury, MD; and his daughter and son-in-law: Cynthia and Douglas Weidner, of Beaver Falls, Pa; his grandchildren: Christin Francona, Gabriel Weidner, Jared Weidner, Daniel Clink, Rachel Clink; six great grandchildren: Drue, Parker, Quinn, Cole, Mya and Lilly. A brother Charles Clink of LaFayette, NJ; a sister and brother-in-law: Grace and William Strope of Zephyrhills, Fla; a sister-in-law: Janet B. Clink of Vestal; his brothers-in-law and sisters-in-law: Robert and Edna Schooley, Jan and Martha Gheen, Ernest and Conley Myers, Donald and Linda Myers, Kenneth and Rosalind Myers; several nieces, nephews and their families also survive. Jim was predeceased by his parents Howard and Anna Clink; his brother Richard Clink; sister-in-law and brother-in-law: Pearl and Ernest Remaly. Family and friends are invited to attend a period of visitation on Monday, October 19th from 1 – 3 pm at the Community Independent Bible Church, 879 Maple Street, Little Meadows, Pa A funeral service and celebration of Jim’s life will follow at 3 pm with Pastor Dale Anscheutz and Pastor David Nelson, officiating. Interment and Masonic services will be held on Tuesday, October 20th at 11 am in the Darling Cemetery. Memories and condolences may be shared by visiting our website at www.sutfinfuneralchapel.com Those who wish may kindly consider a memorial contribution to the Community Independent Bible Church, c/o Pastor Dale Anscheutz, 863 Jones Rd., Warren Center, PA 18851 in loving memory of James L. Clink.

Softly in the morning you heard a gentle call, you took the hand God offered you and quietly left us all&#8230;&#8230;James L. Clink, 76, of Warren Center, Pa passed away unexpectedly on Thursday morning, October 15, 2015. Jim was born on May... View Obituary & Service Information

The family of James L. Clink created this Life Tributes page to make it easy to share your memories.

Send flowers to the Clink family.