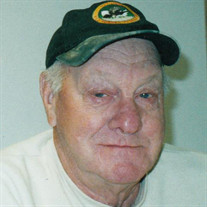 Softly in the morning, you heard a gentle call, you took the hand God offered you and quietly left us all.....James E. Schrader, Sr., 91, of Windham, Pa passed away peacefully on Saturday, July 7, 2018 at the Robert Packer Hospital, Sayre. Jim was born on April 6, 1927 in Monroeton, Pa a son of the late Raymond and Pearl (Walburn) Schrader. He was a graduate of Rome High School and on August 9, 1947 in Tioga Center he married Lula J. Thornton. Together they shared sixty-four years of marriage until her passing on February 16, 2012. For over forty years, Jim was employed at General Electric in Elmira and Lynn, Massachusetts and at one time served as President and Chief Steward of the Union. He enjoyed hunting, fishing, bowling, and watching college basketball. He will be greatly missed by his family ~ Dad until we meet again, find peace in heavens hands. Jim will be greatly missed by his children and their spouses: Beverly Buchmann of Windham, Pa; Melvin and Ann Schrader of Nichols; Dana Schrader of Windham Center, Pa; Tracy and Margarida Schrader of Windham Center, Pa; a daughter-in-law: Betty Schrader of Windham, Pa; a brother-in-law: Thomas Jenkins of Rome, Pa. Ten grandchildren, several great grandchildren and great great grandchildren, many nieces, nephews and their families also survive. Jim was welcomed into heaven by his parents Raymond and Pearl Schrader, his wife Lula J. Schrader, his son James E. Schrader, Jr., son-in-law: William R. Buchmann, and his siblings: Hilda Blair, Lee Schrader, Clifford Schrader, Joanne Olmstead and Patricia Jenkins. Family and friends are invited to attend a period of visitation on Tuesday, July 10th from 11 to 1 pm at the Sutfin Funeral Chapel, 273 S. Main St., Nichols. A celebration of his life will follow at 1 pm with Pastor C. Kenneth Crain, officiating. Interment will follow in the Nichols Cemetery. Memories and condolences may be shared by visiting his guest book at www.sutfinfuneralchapel.com Those who wish may kindly consider a memorial contribution to Stray Haven, 194 Shephard Rd., Waverly, NY 14892 in loving memory of James Edward Schrader, Sr. Dad, you will always be our thoughts and forever in our hearts.

Softly in the morning, you heard a gentle call, you took the hand God offered you and quietly left us all.....James E. Schrader, Sr., 91, of Windham, Pa passed away peacefully on Saturday, July 7, 2018 at the Robert Packer Hospital, Sayre. Jim... View Obituary & Service Information

The family of James E. Schrader Sr. created this Life Tributes page to make it easy to share your memories.

Send flowers to the Schrader family.