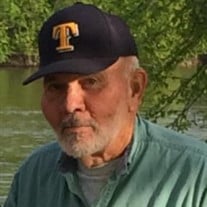 To Watch the Live Stream of Tonto's Service ClickHere James "Tonto" Taylor, 85, of Owego passed away on Monday, November 22, 2021. Tonto, as he was affectionally known by his family and friends, was born on March 13, 1936 in Maine, N.Y. He attended Nichols Union High School and graduated from Riverside Military Academy, Gainesville, Georgia, Class of 1954. Tonto retired from IBM Owego in 1987 following 31 years of service. He was chief of the Nichols Volunteer Fire Department and coached Nichols Ro-Ki youth baseball. He was preceded in death by his parents, Alton and Ila (Lainhart) Taylor, and his granddaughter, Alexandra "Peep" Taylor. He is survived by his wife of 46 years, Kathleen; children Patricia (Miguel), Timothy, Scot (Amy), Michael Taylor, and Dennis Shipman (Susan); sisters MaryAnn Wehrung (Paul) and Martha Sauerbrey (Lewis); 16 grandchildren and three great-grandchildren (with a fourth on the way). He was an avid outdoorsman, enjoying bicycling, competitive shooting, hunting, motorcycle racing, sailing, skiing, woodworking, and was also a gunsmith. His adventures included bicycling through Europe and Russia, sailing between New York and the Virgin Islands, racing in men's downhill skiing at Lake Placid and participating in black powder shooting competitions. For more than 30 years he was a fixture at Greek Peak, skiing with the "Rat Pack." His passion was teaching his grandchildren about gun safety and hunting. Tonto was very proud of his grandchildren — Marta, Ana (Patrick McKenzie), Crissy Gomez-Taylor, John Gomez-Taylor, Jacqueline Medovich (Cody), Patton (Luci), Alexandra, Mitchell, Stephen, Mary, Conlan, Isabelle Taylor, Zachary Dotson (Nicole), Ryan Taylor; Grey and Logan Shipman; and his great-grandchildren — Wyatt Dotson; and Ayla and Odin Medovich. Family and friends are invited to attend a period of visitation on Friday, November 26, 2021 from 4 to 6 pm at the Sutfin Funeral Chapel, 273 S. Main St., Nichols. A celebration of his life will be held on Saturday at 11 am at the funeral chapel. He will be laid to rest in the Nichols Cemetery. Memories and condolences may be shared by visiting his guest book at www.sutfinfuneralchapel.com James was a life member of the Tioga County Sportsmen's Association, the National Rifle Association, and was an advocate for youth shooting sports. In lieu of flowers, in his memory, please consider a donation to TCSA in support of youth shooting sports. Donations can be made payable to TCSA. Memo: Taylor - youth. Address: TCSA, P.O. Box 598, Owego, NY 13827.

To Watch the Live Stream of Tonto's Service [ClickHere]https://my.gather.app/remember/james-tonto-taylor James "Tonto" Taylor, 85, of Owego passed away on Monday, November 22, 2021. Tonto, as he was affectionally known by his family and friends,... View Obituary & Service Information

The family of James "Tonto" Taylor created this Life Tributes page to make it easy to share your memories.

To Watch the Live Stream of Tonto&#39;s Service
ClickHere

Send flowers to the Taylor family.