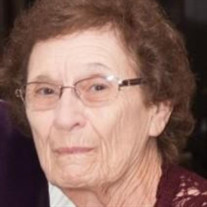 JEAN MARIE PHILLIPS October 23, 2021 Remember me with smiles and laughter, for that is how I will remember you all. If you can only remember me with tears, then don’t remember me at all. With her children by her side, Jean Marie Phillips, 87, of Rome, went to be with the Lord on Saturday, October 23, at the Robert Packer Hospital. Jean Marie was born on June 28, 1934 in Rome, PA at a small clinic on Main Street. She was the daughter of the late Irving K. Phillips and Adeline E. Phillips. She was a graduate of the Rome High School Class of 1952. After high school she attended Mansfield University, graduating in 1956, with a degree in Education. She began her career teaching kindergarten at the Ulster Elementary School and later transitioned to first grade. She retired with over 30 years of service to the Athens Area School District. ​ Jean Marie’s greatest joys were her two children, Laurie and David of Rome. For over 70 years she was a faithful member of the Rome United Methodist Church, joining on March 13, 1947. She attended the Adult Sunday School Class and was treasurer of the Sunday School where she also played the piano. She sang in the church choir and over the years served on many different committees as well as preparing and serving many turkey dinners. She faithfully took care of the grounds of the church along with cleaning, buying flowers, and making sure every Sunday the church was ready for the morning service. You would see her car there most days checking on things and often opening up for evening meetings. Jean Marie will be greatly missed by her church family. She was a dedicated member of the Eastern Star Lodge in Rome for well over 50 years where she also played the piano. Because of her love for music, she was a member of the P.P. Bliss Museum in Rome, PA. Jean Marie is survived by her children, Laurie and David, her brother Duane I. Phillips, Sr. and his wife Shirley of Rome, PA, and numerous nieces, nephews and their families. She was predeceased by her father and mother, Irving and Adeline Phillips. Abiding with Jean Marie’s wishes, there will be a private graveside service for family and closest friends. A memorial service will be planned at a later date. In lieu of flowers, kindly consider a memorial gift in her memory to the Rome United Methodist Church Memorial Fund, c/o Mrs. Sally Allis, 93 North Rome Road, Rome, PA 18837. Memories and condolences may be shared by visiting her guestbook at www.sutfinfuneralchapel.com Caring assistance is being provided by the Sutfin Funeral Chapel, 273 S. Main St., Nichols.

JEAN MARIE PHILLIPS October 23, 2021 Remember me with smiles and laughter, for that is how I will remember you all. If you can only remember me with tears, then don&#8217;t remember me at all. With her children by her side, Jean Marie... View Obituary & Service Information

The family of Jean Marie Phillips created this Life Tributes page to make it easy to share your memories.

Remember me with smiles...

Send flowers to the Phillips family.