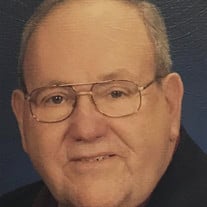 Softly in the morning you heard a gentle call, you took the hand God offered you and quietly left us all…..John W. Tinney, 80, of Owego, passed away peacefully in his sleep on Saturday, February 3, 2018. Jack, as he was affectionately known by his family and friends, was born on January 30, 1938 in Mechanicville, NY the son of the late Paul and Gertrude (Maloney) Tinney. On September 6, 1959, Jack married Grace Alicia Wendell, together they shared fifty-seven years of marriage. Jack retired following forty three years as engineer for IBM – Lockheed in Owego. He was a member of Blessed Trinity St. James Church, was active in Boy Scouts as a Webelo leader and was very active in the Tioga Central Booster Club for many years. Jack’s greatest enjoyment was cheering on his children and grandchildren as they participated in various sports, variety shows, chorus, band and spelling bees. Fond memories of family camping getaways, vacations to Cape Cod, along with spending weekends at the Finger Lakes, held a special spot in his heart. Jack will be greatly missed by his wife Alicia; his children: Paul and LeeAnn (Thomas) Tinney of Nichols; David and Margaret (Duffy) Tinney of Mechanicsville, VA; Scott and Holly (Depew) Tinney of Barton; Susan and Jeffrey Walker of Chemung; Daniel and Tonya (Gunther) Tinney of Gilbert AZ; his special grandchildren: Cathryn (Stephen) Lindsay, Ryan (Jenna) Tinney, Meghan (Phil) Bisson; Ashley (Andrew) Schultz, Madison, Shannon and Lauren Tinney; Ethan and Brayden Tinney; and a great-granddaughter Brooklyn. His sister Joan Hoyt; nieces and nephews: Kevin, Christine, Melissa and Steven. Jack was predeceased by his parents; his son Brian; and brother-in-law: Larry Hoyt. Family and friends are invited to attend a period of visitation on Tuesday, February 6th from 5:00 to 7:00 at the Sutfin Funeral Chapel, 273 S. Main St., Nichols. A Mass of Christian Burial will be celebrated on Wednesday, February 7th at 10 am at St. James Catholic Church, Waverly with Father Anthony Amato, officiating. Spring interment will be in the Nichols Cemetery. Memories and condolences may be shared by visiting his guest book at www.sutfinfuneralchapel.com Those who wish may kindly consider a memorial contribution to the American Heart Association,7272 Greenville Ave., Dallas, TX 75231

Softly in the morning you heard a gentle call, you took the hand God offered you and quietly left us all&#8230;..John W. Tinney, 80, of Owego, passed away peacefully in his sleep on Saturday, February 3, 2018. Jack, as he was affectionately... View Obituary & Service Information

The family of John "Jack" W. Tinney created this Life Tributes page to make it easy to share your memories.

Send flowers to the Tinney family.