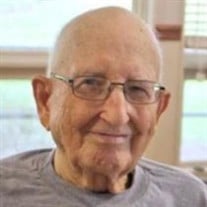 Goodbyes are not forever, goodbyes are not the end. They simply mean we’ll miss you until we meet again…. John William “Bill” Watson, Sr., 95, went home to be with his Lord and was reunited with his loving wife Alice (Dimon) Watson on Saturday, July 18, 2020. A native of Towanda, Pa Bill was born on May 16, 1925 a son of the late Francis E. and Maxine (Young) Watson. He was a graduate of Towanda High School Class of 1943. Following graduation, Bill enlisted into the US Army and proudly served his country from 1943 ~ 1945. He served as a Platoon Guide Staff Sergeant in the 94th Infantry Division of General Patton’s 3rd Army during WWII. Bill was awarded the Combat Infantryman’s Medal and Bronze Star in addition to the Purple Heart he received for his wounds near Trier, Germany. On September 22, 1945, Bill married the love of his life Alice Dimon and together they shared 72 years of marriage until his heart was broken on February 16, 2018 with her passing. Bill received his Bachelor of Science Degree in Mechanical Engineering from Tri-State College, Angola, Indiana. For over 32 years he was employed by Ingersoll-Rand in various Engineering positions. Bill and Alice were devoted members of the Athens United Methodist Church where he served on the Administrative Board and as Sunday School teacher. They had resided in Milan for over thirty years. He represented Ulster Township on the Athens Area Joint School Board from 1960 to 1968. Following retirement in 1982, Bill and Alice resided in Zephyrhills, Florida. They enjoyed spending summers closer to family at the Watson homestead in East Towanda. Bill was a Bronze Life Master Bridge player and enjoyed playing at duplicate clubs in both areas. An avid cyclist, Bill rode over 20,000 miles including trips from Pennsylvania to Niagara Falls, Ogdensburg, and Zephyrhills, Florida. Bill made time to go bowling, play cards in his card club and hunting with his friends. He possessed excellent marksmanship and earned many medals for his keen sight. Despite a full-time job, Bill spent a large portion of his time raising black-angus cows, especially devoting his weekend hours tending to them. He also enjoyed being an Income Tax counselor for AARP at the Zephyrhills Senior Center for eleven years. Bill will be greatly missed by his children: Gary and Mimi Watson, Connie Watson, Bonnie (Watson) Fraley; Dawn (Watson) and Larry Jordan; a daughter-in-law Sue Watson; nine grandchildren, twelve great grandchildren; a sister-in-law: Louise Dimon; several nieces, nephews and their families also survive. Bill was predeceased by his parents, his wife Alice and his son John William Watson, Jr. Due to the current health issues facing our world, the family will gather for a private memorial service at the Athens United Methodist Church. A live stream on his Memorial Service can be view on the link below: https://my.gather.app/remember/john-william-watson-sr Bill will be laid to rest in the Wysox Cemetery. Memories and condolences may be shared by visiting his guestbook at www.sutfinfuneralchapel.com Those who wish may kindly consider a memorial contribution to the Athens United Methodist Church or their local chapter of the American Cancer Society.

The family of John William Watson Sr. created this Life Tributes page to make it easy to share your memories.

Send flowers to the Watson family.