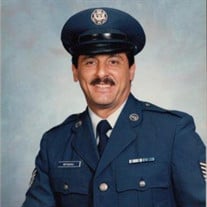 Joseph Peter Buttacavoli, 75, of Warren Center, passed away peacefully at his home on Tuesday, July 13, 2021. Joe was born on April 10, 1946, in Philadelphia, PA, the son of the late Joseph and Victoria (Antonelli) Buttacavoli. Joe was proud to serve his country in the military, spending several years in the Army and then the Air Force, for a combined 33 years of service. Fondly known during his time in the service as 'Joe Butter', he used his skills as a master mason and civil engineer to build hospitals, schools, bases, and runways around the world. Following his military career, Joe worked on housing projects for the city of Philadelphia. He "retired" at the age of 55, but volunteered to go back into various responsibilities after 9/11, including guarding the Air Base in Willow Grove, PA. It was at this time that he made Warren Center his home, constructing and moving into his log home on land he had purchased back in 1989. He grew to love the area, made many friends, and was affectionately known as ‘Brickhouse Joe’ around the community. Joe volunteered for the VFW, doing routine maintenance such as mowing and snow plowing. In the winter, it was not unusual to see Joe driving his tractor down the road to keep the snow cleared. If the VFW was not plowed "his way", you weren’t doing it right. He also served as the Chaplain for the VFW. He cared for young and old alike as the Eucharistic Minister to the sick and with his participation in the St. Barnabas CYO, in Southwest Philadelphia. Among many other volunteer activities, Joe enjoyed ringing the bell for the Salvation Army during the holidays and presenting the Big Buck Contest at school, an event sponsored by the VFW. Joe lived a full life with many exciting experiences and notable achievements, including traveling around the world. In his free time, he enjoyed hunting, planting trees, and gardening. Though his hands were never idle, Joe always made time to help someone in need. He loved animals, visits with friends, cigarettes, and of course scotch (always with water, on the rocks)! Joe's warm personality and kind heart will be greatly missed by all of his family and friends. Joe is survived by his daughters Charlene Buttacavoli, Celeste Carangi, and Jennifer (Amanda) Buttacavoli; sons Joseph and Michael Buttacavoli; sister Rita (Richard) McCann; grandchildren: Melanie, Mackenzie, Sean, and Sebastian Harrington; and Emma and Abigail Carangi; and many nieces, nephews, cousins, and friends. Friends and family are invited to the Holy Rosary Catholic Church, 3200 Philadelphia Pike, Claymont, DE for a period of visitation on Monday, July 19th from 9-11 am, at which time a celebration of his life will be held with full military honors accorded. A luncheon will follow. On Tuesday, July 20th, an additional time of visitation will take place at Sutfin Funeral Chapel, 273 S. Main St., Nichols, NY from 11-1 o'clock. Burial will follow in St. Luke's Cemetery, Warren Center, with the VFW honor guard present. Sutfin Funeral Chapel is assisting the family with arrangements. In lieu of flowers, memorial contributions may kindly be made to the VFW Post 6824 in loving memory of Joe. Memories and condolences may be written in his guest book at sutfinfuneralchapel.com.

Joseph Peter Buttacavoli, 75, of Warren Center, passed away peacefully at his home on Tuesday, July 13, 2021. Joe was born on April 10, 1946, in Philadelphia, PA, the son of the late Joseph and Victoria (Antonelli) Buttacavoli. Joe was proud... View Obituary & Service Information

The family of Joseph Buttacavoli created this Life Tributes page to make it easy to share your memories.

Send flowers to the Buttacavoli family.