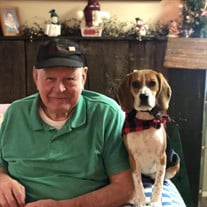 A life well lived is a precious gift of hope and strength and grace, From someone who has made our world a brighter, better place It’s filled with moments, sweet and sad. With smiles and sometimes tears, With friendships formed and good times shared and laughter through the years. A life well lived is a legacy, of joy and pride and pleasure, a living, lasting memory our grateful hearts will treasure~ Joseph "John" L. Karpauitz, Jr., 88, affectionately known as the "Mayor of Potterville" passed away peacefully of natural causes on Thursday, January 7, 2021 at the Robert Packer Hospital, Sayre. John, as he was known by his family and friends was born on February 24, 1932 in LeRaysville, Pa a son of the late Ruie (Grippin) and Joseph Karpauitz, Sr. John spent his youth in LeRaysville, he often reminisced how he walked to school in the snow and during his school years had assisted on the Gorham Farm. John was a graduate of the LeRaysville High School class of 1951. Following graduation, he enlisted into the US Marines and proudly served his country from 1952 – 1955. A dedicated Marine, John took great pride in displaying the United States Flag and was honored to receive the Veteran’s Appreciation Day Award at Northeast Bradford School in 2017. On December 19, 1964 in Herrickville, Pa John married Dawn Brown and together they recently celebrated their 56th wedding anniversary. John will be remembered for owning the Karpauitz Loggings and Saws a business which he started in 1955. The door was always open at his shop he loved to have friends and neighbors visit and conversations would often include news of Bradford County and politics. If you were lucky, you even had some of Mimi’s cooking or Penny’s chocolate chip cookies! Conversations would often lead to John’s heart gleaming with pride as he was so very proud of his granddaughter’s accomplishments in and out of school. As “Mayor of Potterville” John was proud to call Bradford County his home. He enjoyed hunting, fishing, snowmobiling and trips around the block. John was an instrumental and a founding member of Haighs Pond, where he served as director and loved to be present for the boat shows. He also dedicated many hours to the restoration of Cook’s Pond and also enjoyed ice fishing there too. John was a member of the Dille Parish United Church of Christ; the VFW Post 6824 and the Eastern Bradford Rod & Gun Club at Haighs Pond. John and Dawn also loved the comforts of their recliners where they enjoyed cheering on the Dallas Cowboys and watching the races. He also loved to spend time outdoors gardening and tending to his yard. Although you’re now in heaven above, we pray you feel our continuing love and how blessed we were by your life here. We’ll always hold your memory dear~ John will be greatly missed by his wife of 56 years Dawn; his memory will forever be treasured by his daughters: Candy K. Haverly and Penny Karpauitz; his sister Iola Cragle; his special granddaughters: Bridget Haverly (Rob Borkowski) and Josie Haverly; Gary’s son Matthew; his sisters-in-law and brothers-in-law: Florence “Peg” and Tom Taylor; Willis “Bill” and Genelle Brown; Sam and Diana Brown; his nieces and nephews: Curt and Yvonne Cragle, Becky and David Dewing; Jim and Rita Crawford, Pose and Greg Foster, Susan and Jack Allis, Gary Karpauitz and Judy Cole, Robin and Lee Moore, Ark Karpauitz, Lorinda and Bobby Vanderpool and all their families; many cousins and his favorite canine companion and grand dog Piper. John was welcomed into heaven by his parents Ruie ~ December 1973, Joseph Karpauitz ~ January 1984; his son-in-law: Gary Haverly ~ August 2019; his siblings: Donald “Kap” Karpauitz ~ October 1987; Robert Karpauitz ~ March 1990 (Esther ~2013); Betty Allis ~ July 2015 (Raymond Allis ~ March 2015); a brother-in-law: Robert Cragle ~ October 2015; his mother-in-law and father-in-law: Ella ~ December 2003; Daniel Brown ~ June 1991) his sister-in-law: Sally Rawlings ~ May 1982 ; and niece Caren Philippi ~ December 2005. Family and friends are invited to attend a period of visitation on Sunday, January 10th from 2 – 6 pm at the Sutfin Funeral, 273 S. Main St., Nichols. Appropriate precautions will be taken for public health concerns when at the funeral chapel to include wearing masks and social distancing. A funeral service and celebration of his life will be held on Monday, January 11th at 1 pm at the funeral chapel. The service will also be streamed at https://my.gather.app/remember/joseph-karpauitz-jr Memories and condolences may also be shared by visiting his guestbook at www.sutfinfuneralchapel.com Those who wish may kindly consider a memorial contribution to the LeRaysville-Pike Volunteer Fire Company, P.O. Box 78, LeRaysville, PA 18829 or to the Northeast Bradford Education Foundation, 526 Panther Lane, Rome, PA 18837 in loving memory of Joseph “John” L. Karpauitz.

A life well lived is a precious gift of hope and strength and grace, From someone who has made our world a brighter, better place It&#8217;s filled with moments, sweet and sad. With smiles and sometimes tears, With friendships formed and good... View Obituary & Service Information

The family of Joseph "John" L. Karpauitz Jr. created this Life Tributes page to make it easy to share your memories.

A life well lived is a precious gift of hope and strength and...

Send flowers to the Karpauitz family.